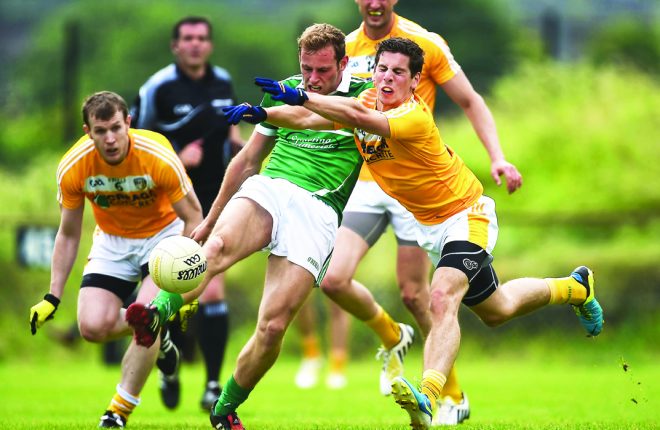 Antrim’s season ended at the hands of Limerick

Down’s calamitous season was brought to a close by Longford. The Mourne men gave up the ghost after extra-time to a division three team which has only a solitary Leinster title to its name in terms of championship silverware.

Elsewhere Antrim didn’t even get as far as extra time.

Promoted undefeated from division four playing in Corrigan Park against a team which plummeted out of division three without managing to muster a single win. What happened next should have been a bit of a surprise, but unfortunately it wasn’t.

Limerick went in at the break leading 2-2 to 0-6 before going on run out 2-6 to 0-9 winners. It was the Treaty County’s first win of any variety in 14 months of football.

The impact of Antrim’s exit in the football was doubled by defeat in the Christy Ring final replay. No arguments this time, Meath were 4-21 to 5-17 winners, Antrim have the Ulster championship to look forward too. Yes, that’s being ironic.

Down’s demise is concerning, but nowhere near as worrying as what has happened to the value of Saffron stock.

This is a county which has almost 60 clubs, more than any other county in Ulster. If available playing resources are an indicator of potential success then Antrim should be a regular fixture in Ulster semi-finals and the latter stages of all-Ireland competitions in both codes.

But they’re getting their pants pulled down by Meath in the hurling and letting Limerick show them who’s boss in Corrigan bloody Park.
So where the hell is the problem?

I think back to a brilliant column written by Dara Ó Sé in the Irish Times recently. In it he takes Cork to task, with no small sense of relish you feel, about losing to Tipperary in the football. It bore the wonderful headline, “It looks like Cork have become immune to the shame”

It’s an interesting piece, because it doesn’t really analyse the roots of Cork’s failure, but rather it shines a light on the drivers in Kerry success.
Here’s one of the key lines from that piece.

“Maybe I’m wrong but it looks a lot like the shame has gone out of it for some of these Cork players. If the shame goes, you’re at nothing.

To really compete at the top level, it has to be such an integral part of you that a non-performance actually makes you ashamed to face people.”

Did the Antrim footballers and hurlers leave their respective games on Saturday feeling ashamed to face people?

Let me answer that question for them.

I don’t doubt they felt pain about the loss, disappointment in their own personal performances, but shame about what they had done to the county’s reputation was not a factor. The reason for that is because their county’s reputation is a joke. That’s harsh, but it’s just stating a fact.

We know that Antrim clubs are more than capable of punching their weight with the very best i the country in both codes. For me that’s a indication that the players are there, contrary to all the protestations.

The problem is that no one seems to think that getting a win for Antrim is something worth dying for. People will die in the last ditch for Cargin, Cushendall, St Gall’s or Loughgiel, but they’re damned if they’re going to do that for Antrim.

There is no easy solution to this problem. Antrim is a whipped cur, and building self-esteem from such a lowly position is always difficult.

We can talk about structures, management, resources, coaching and all that paraphernalia until the cows come home, but this has to start with the players pulling on the Saffron jersey right now. Young players want to buy into successful teams. Right now an Antrim youngster would be bonkers to be giving any serious thought to representing their county at the highest level.

Players right here, right now have to decide that playing for Antrim matters, that Antrim getting beaten by sides they should be beating is actually something to feel shame about. If they can’t summon up that sort of emotion for their county then there’s no hope for the future.

Some might ask why a successful Antrim even matters. There are a number of reasons. First of all is that the county occupies a position in the north similar to that of Dublin in the south. It is the hub of the regional media and the place where cultural priorities are set.

When Dublin aren’t competing, then GAA is a fringe interest in the wider public discourse.

Pure brute geography means that if Ulster GAA is ever to get the recognition it deserves in the north, Antrim have to get the finger out and start winning things.

Another factor is that a successful Antrim will help make the revamped Casement Park a real beacon for Gaelic Games in our provincial capital.
Antrim Gaels might not think much of their county, but for the rest of Ulster it’s important that they change have a serious change of heart on that particular matter.