DERRY minors are still hurting from their Ulster final defeat but are glad to have the opportunity to right the wrongs insists manager Martin Boyle.

The Oakleafers take on a Cork team who were 3-11 to 0-9 winners over Kerry in last week’s Munster final.

The game will take part of a double header that includes Tyrone’s clash with Kerry (4pm).

While selector Darren McShane was in attendance at Páirc Uí Rinn to run his eye over this Saturday’s opponents, the squad had a “very honest” meeting before making a pact to turn in an improved performance.

“The standards the boys set themselves weren’t met,” said Boyle of the group’s self-assessment of their Ulster final defeat to Tyrone.

“They were accountable to themselves, both individually and collectively. They were disappointed with a lot of parts of the game, which is good.

“I just know that when we watched back certain parts of it, they didn’t recognize themselves and there is a new determination to put that right.”

From watching selected footage, the young Oaks were “collectively” disappointed feeling they didn’t do themselves justice.

“There is a fair degree of hurt still there, but that will be a good thing if we channel it the right away,” Boyle added.

While the Derry boss accepts his side played well for long periods, he wasn’t surprised by the character shown as they chased the game. 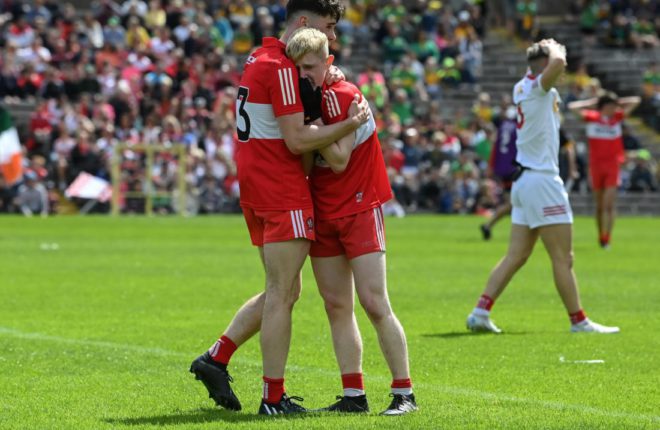 “They (Tyrone) scored four goals and we didn’t defend collectively well enough, so in our book, as a management team, Tyrone deserved their victory,” he added.

Some the players admitted the occasion of being part of the double header got to them in the early stages as Tyrone pushed into a commanding lead.

There was also the lingering feeling of letting the county down, with talk of a potential minor and senior double, something Boyle strongly dismisses.

“That’s utter nonsense, but that’s the way these men are like,” he pointed out. “They have serious standards. They want to give of their best and they didn’t that day. They do feel they let everybody down, which they didn’t and they haven’t all year.

“I know they’ll produce a performance full of character this weekend. If it’s enough to get them over the line, great, and if it’s not then they can still hold their heads up high because the future is bright for them in our opinion.”

Having also studied footage from Cork’s games, Boyle outlines the challenge facing his side this weekend.

Kerry were 1-16 to 0-5 winners over Cork earlier in the championship and after regrouping, they saw off Tipperary to book their spot in the final, a rematch against the Kingdom.

“They are a very, very athletic team, a lot of very good forwards…the inside forward line is very good,” Boyle outlined.

“Their centre half forward is a very good ball player and a lot of strong-running defenders.”

The Rebel selectors made five changes to their side by the Munster final rematch, with a new-look attack hitting just one wide over the course of the game.

“They were a lot better defensively, which shows they can defend against Tipperary and against Kerry,” Boyle added.

“They are coming in on the back of three games and on the back of a bit of momentum having turned a big defeat to a big victory and that makes them a very dangerous opposition.”