When Blackhill take on Thomas McCurtain’s in the All-Ireland quarter-final next month, they’ll be as prepared as they probably could expect to be.

That’s down to the dedication shown by team manager Aidan McCabe. On Saturday night the Emerald’s produced a superb second-half display to defeat Buncrana to win their first provincial title and on Sunday morning he flew to Leeds to watch McCurtain’s defeat Glasgow Gaels in the British Junior final.

“When we get a chance like that we’ll take it,” McCabe said of his flying visit.

“You always want to run your eye over the opposition and we certainly will not be taking anything for granted.

“British champions versus Ulster champions, it’s not a case of there only being one winner. From memory I think it took an extra-time game for one of the Donegal sides to win it there (Red Hugh’s v Dunedin Connolly’s, 2017) so you get your homework done.”

At half-time on Saturday those air miles, and those that will be clocked up early next month for a trip to London, seemed unlikely.

The Donegal champions led 0-8 to 0-5 and the Oriel side had lost Phillip Donnelly, the tormentor of Killinkere in the semi-final, to a black card. However, they would win the second half 1-6 to 0-1 to make up for their final loss to Rock back in 2016.

McCabe feels that the resilience of the team deserves special credit as they also had to deal with losing three county finals in a row before getting over the line in Monaghan three years ago.

“When you hear some of the horror stories from a few years ago and now those boys have Ulster medals,” he said.

“It used to be a fantastic year to not finish bottom, to win a couple of games. One of the boys was telling me that they won a championship game against Toome – their first championship win in so long – and they were carried off the field.

“To go from that to getting to finals and it not happening, and wondering would it ever, to winning county titles and now Ulster – that takes a lot of character.

“They lost the 2016 final by a point after extra-time but they showed heart. You had Jason Finnegan unavailable due to a harsh red card in the semi-final and then Philip Donnelly going off in the first half when you’re a few points down.

“Every excuse was written for them but those lads said ‘no, we’re going to make this work.’” 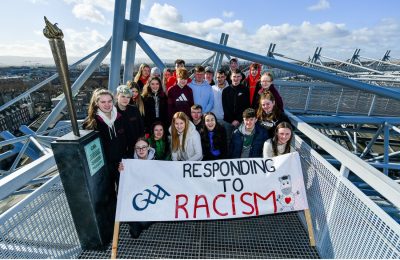