DONAGHMOYNE’S record in All-Ireland semi-finals has been relatively poor by their own high standards in recent seasons, and that’s something their coach Annemarie Burns is looking to rectify.

The Donaghmoyne ladies take on Galway outfit Kilkerrin-Clonberne on Sunday as they bid to reach the All-Ireland final for the first time since 2016 (a glorious day for the Monaghan club as they claimed their fifth ever title).

However, they’ve played in two All-Ireland semi-finals since, and lost them both, so they’ll be hoping it’s third time lucky this Sunday.

“We’ve fallen short this last few years and we’re disappointed by that, as we thought we had them prepared well in the games we lost. The travel is hard, the last two we lost, we had a long distance. We’d definitely like to get back to a final but we’re facing a very good squad, they’ve been knocking on the door and they’re still young as well. It’s not going to be easy but we’ll go with a positive attitude anyway.”

Donaghmoyne won their 13th Ulster title with a replay victory over up and comers Bredagh prior to Christmas. They’ve completely bossed matters in the province since winning their first Ulster Championship in 2004, but there was a bit of chat around the county that they’re past their best. Burns admits harnessing that sort of talk as motivation for the team.

“Ach, I think there were a few comments earlier in the year, throwaway comments about the girls being old. That probably didn’t go down too well with some of them. You’re going to get that and they have their own motivation. They want to win things and that’s your own motivation. You can throw in other things to get them riled up but look, getting to the final is their only motivation at the moment.”

Francie Coleman, a legendary figure by any measure, remains in charge of the club. He’s been part of every single one of their successes over the last two decades, but Burns does the bulk of the coaching these days and played her part in all five of their All-Ireland successes.

While still playing with her club. she moved into their management set-up in 2014 and was part of the management team that led them to back-to-back All-Ireland successes in 201516.

“Francie has been there from the start but I’ve been involved for over 20 years with the club between playing and a bit of coaching.”

Donaghmoyne have reached this stage by virtue of their replay victory over Bredagh. Their drawn encounter went to extra-time, and was easily their most competitive match in the provincial arena. Lessons were learned, it’s fair to say, and they’re back-boned by hugely experienced performers like Sharon, Cora, Fiona, Joanne and Rosemary Courtney, Cathriona McConnell, Linda Martin and a wealth of others.

Burns said: “We did learn a lot. It was a tough game against Bredagh, even the replay was tough, they kept nipping away at us even though we were on top for most of it.

“We won well on the scoreboard against Carrickmore and Glenfin, even though they’re two good teams, so it is fair we learnt the most from the Bredagh games.” 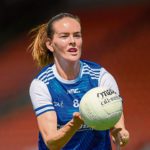 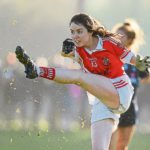