MONAGHAN are on the hunt for a new manager following the breaking news that Seamus McEnaney has stepped down after two seasons in charge.

It was McEnaney’s second stint in charge of his native county, and his main achievement over the last two seasons was maintaining their cherished Division One status. They also won this year’s McKenna Cup title with a hard-earned victory over Donegal.

They also made it to last year’s Ulster final, where they lost by a point to Tyrone, but ‘Banty’ has taken the decision to step aside following their recent qualifier defeat to Mayo.

In his parting statement, McEnaney said, “Managing Monaghan has been one of the great privileges and honours of my life. I am very grateful to the Monaghan county board and my club, Corduff Gaels, for giving me the opportunity to represent them in the role as Monaghan team manager.

He also thanked the Monaghan players and supporters.

“I want to thank the fantastic gaels of Monaghan who always support the Monaghan team and who lifted our team performances with their passion and fervour from the stands.

“The Monaghan players are a special bunch of men who have been fantastic ambassadors for the people of Monaghan.” 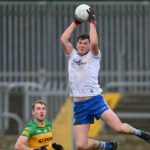