SUNDAY will see a first Ulster final between minor heavyweights Tyrone and Derry since 2007 when Raymond Munroe steered the Red Hands to a 0-10 to 1-6 victory.

Chrissy McKaigue was the Derry vice-captain, with current Oakleafers’ Strength and Conditioning Coach Peter Hughes lining out on the Tyrone attack.

The current Tyrone crop have already annexed the League title with victory over Derry in the decider and needed penalties to fend off Donegal in Saturday’s semi-final.

Derry were five-point winners over Cavan at the weekend to make a sixth final in eight seasons as the Oak Leaf County continue to enjoy an underage renaissance.

Martin Boyle managed Derry to the All-Ireland title in his first season and is now in a third year in charge.

He will have to plan without Captain Ryan McNicholl who sustained a knee ligament injury in their win over Donegal and faces a year on the sidelines.

Eoin Higgins, Ciaran Chambers and Odhran Murphy have carried the attacking threat in his absence.

Derry have an excellent defence, but they’ll have to wait on the fitness of Eoin Scullion who was replaced midway through the second half of Saturday night.

Fionn McEldowney has excelled in Derry’s defence, with Shea Birt and Cahir Spiers chipping in with scores.

They have the experience of Ruairi Forbes from the St Mary’s Magherafelt MacRory Cup winning team.

Gerard Donnelly is back at the helm in Tyrone after taking them to a whisker of last year’s All-Ireland title.

Captain Eoin McElholm is one of the survivors from 2021, with Noah Grimes having tasted action on their journey last season. 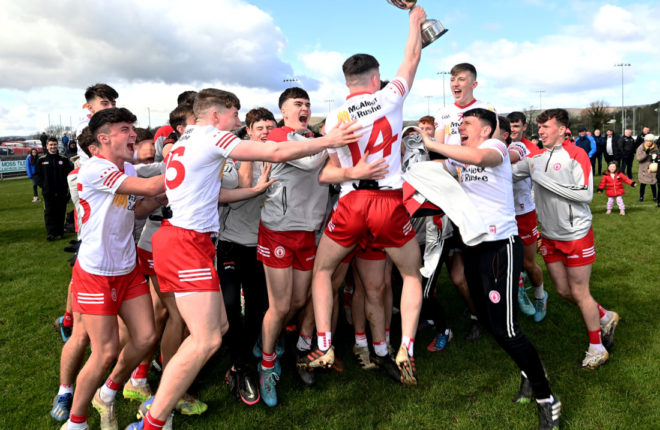 Conor O’Neill is another key player on a side that have yet to be beaten this season.

After pushing themselves into a winning position, Tyrone were hit by a late goal and their fate was decided on penalties with goalkeeper Conor McAneney the hero.

Tyrone have taken home the Fr Liam Murray Cup home on 24 occasions with Derry second in the roll of honour with 15 titles.

After a vintage 16-year spell that yielded eight Ulster and four All-Ireland minor Championships from 1997, Tyrone’s win last season was a first since 2012 – a famine in their book.

Derry have enjoyed success after a 13-year absence and will go in as underdogs, but the bumper Oakleaf support coming in for the senior game could be the grain of rice to tip the scales back to an eagerly awaited decider.