FORMER Donegal star Mark McHugh is happy with Kilcar’s progress in this year’s championship, but expects Sunday’s ‘ding dong’ showdown with Naomh Conaill to ‘down to the wire’ again.

The sides met in the controversial rescheduled 2020 decider, with the Glenties based side lifting the title after a penalty shoot-out.

Kilcar lodged an appeal, alleging Naomh Conaill used more than the permitted three substitutes in extra time, and the game will have to replayed.

McHugh insists that despite the ‘hype within the county’ over Sunday’s rematch in this year’s competition, Kilcar have put the appeal and refixed game out of their thoughts.

The Towney club were six points down against St Eunan’s in their first group game and needed a Patrick McBrearty penalty and five Matthew McClean points to begin the campaign victorious.

After wins over Ardara and Four Masters, Kilcar were 1-17 to 0-2 winners over MacCumhaills in the quarter-finals.

McHugh and the Kilcar contingent watched on with interest as Naomh Conaill beat 2018 Ulster champions Gaoth Dobhair to make the last four.

“It is going to take a mammoth effort for us to beat them on Sunday evening,” Mark said.

Naomh Conaill hit four goals to win the 2015 semi-final meeting of the clubs, with five Kilcar goals turning the tables the following year. They met in the 2017 decider, a 0-7 to 0-4 win for Kilcar, with Naomh Conaill taking their title off them 12 months later

“It can go either way any year, so we have to be at the top of our game to perform as best we can and come out on the right side,” said McHugh of this weekend’s instalment.

He feels the current Naomh Conaill team is ‘one of the best’ teams to come out of the Donegal championship.

“We know what they have done over the past number of years in Donegal,” he said. “Their squad and management team has to take a lot of credit. I think every club in Donegal respect the hell out of Naomh Conaill for what they have achieved.

“How they play as a squad, as a unit, as a team, they are brilliant at it. They have their tactics down to a tee; they are so used to playing with each other.”

McHugh uses the cliché that Sunday is all about who delivers a performance when it matters.

After their 2017 title, they Kilcar lost out in a shootout with Sleacht Néill in the Ulster championship. Since then, Conor McShane and Michael Hegarty – who made his 100th championship appearance earlier this month – are fringe players, used when needed. Youngster Ryan McShane, Oran Doogan, Ryan and Brian O’Donnell

Conor McShane and Michael Hegarty they have gone on in years and are used a bit differently than they were back then.

“We are disappointed that we didn’t have another county championship or two, so there is that feeling within the group, but there is always somebody in your way and, for us, it’s Naomh Conaill this weekend.” 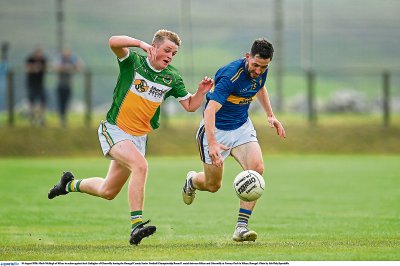