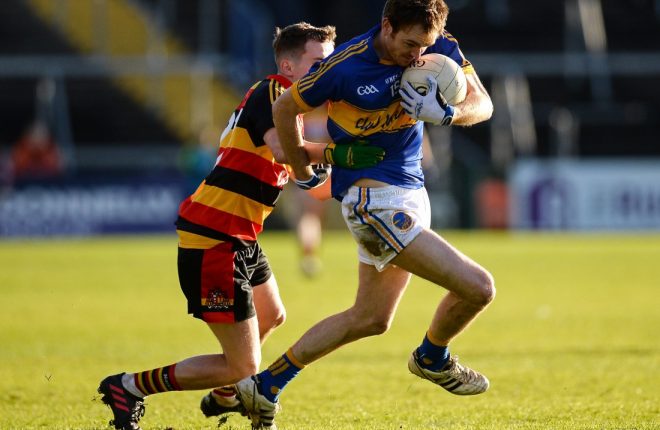 ANYBODY writing-off Maghery’s chances of making an impact in Ulster on account of the club being first-timers should really reassess their position.

The Sean McDermott’s made history two weeks ago when they lifted the Gerry Fagan Cup for the first time after their victory over Cullyhanna in the Armagh final.

Champagne was sprayed, the team called in with junior champions Clonmore for a pint on the way home and the party went on until the wee hours of Sunday morning.

By Wednesday evening the squad was back at training and participating in a tough session with a new task in mind. Manager Shane McConville has warned that only now will you see the real Maghery as they prepare to take on Cavan champions Ramor United in the provincial quarter-final this weekend.

“I do honestly think that the shackles will come off some of our boys now,” said the Lurgan man.

“I think you’ll see a better Maghery team, a more relaxed team. I expect an improvement in decision-making too.

“It was poor against Cullyhanna and it has been throughout the championship.

“You watch Maghery in the league and decision-making isn’t an issue, they seem to do things so naturally.

“The word championship, for the simple reason that they hadn’t won it, brought a bit of pressure.

“If the pressure is there the decision making suffers and I’m hoping now that Ulster will be different because the pressure of chasing that first title isn’t there anymore.

“We want to go in there with an open mind and I think we’ll be a much, much better team now.”

Maghery were well represented at Breffni Park on Sunday, with McConville and some of the players making the trip for Ramor’s narrow win over Castlerahan.

While some management teams would bat away suggestions that seeing your opposition beforehand is an advantage, McConville doesn’t see the point in playing silly games.

“Anyone who says that (it’s no advantage) is talking through their hat,” said the former Armagh player.

“There are so many things to look at whether it be the style of play, their formation, matching men up through height, the length of the goalkeeper’s kick or the variations in his kick.

“There are a million things to look at and it’s nice to get a head start on it.

“There’s probably not a massive tradition inside Cavan when it comes to the Ulster Club.

“At the same time, I don’t think they will be afraid of anyone coming out of Armagh either.”

The full interview with Shane McConville is available in store today or online here.