MAGHERACLOONE Mitchells are on the push for promotion this season, and they hope that an influx of breakthrough young talents will help new manager Gary Farrelly drive the team on.

Having bounced between Senior and Intermediate levels in recent years, Bernard Freeman, who is a part of Farrelly’s backroom team, says that Magheracloone will be looking to build a solid structure, so if they can get promoted, they won’t be coming back down.

“Gary has come in as manager, and myself and Keith Gibson, two local lads who have been involved with the team down the years, have come on board as selectors,” he said.

“Gary has brought a very professional approach in, coming from his background of being the Cavan Minor Manager, so he has brought a bit of new life to the club.

“Our aim is to try and progress and get out of Intermediate football again, but this time if we can go up, we’d like to be structurally sound enough to stay there.”

In order to have a good season, Magheracloone will be looking to their young talent to drive them on with talented teenagers Dylan Byrne, Patrick Farley and Dylan Farley, who played on the Patrician High School team that lost the All-Ireland Final to Gorey in March.

Padraig McMahon and Alan Kearns are two other young players who are big contributors, and even though he may be getting older, ex-Monaghan player Gavin Doogan is still a main engine in the team.

“We’re going through a process of rebuilding,” said Freeman.

“We have four lads who have come through, who played for the Patrician High School this year in the All-Ireland Final, and three of those lads are 17 and one is 18.

“In that sense, we’re trying to rebuild by entering those lads with our older stalwarts – the two Ward brothers (Pete and James) are still playing and Gavin Doogan, but outside of that we would be quite a young outfit.”

However, despite their big ambitions, the club are still feeling the effects of when an old mine partially collapsed on their land in September 2018, which has left that without the facilities, that Freeman feels you need to compete with the top teams.

“Strength and conditioning is a big part of games nowadays,” he said.

“And when you don’t have the proper facilities you’re at a disadvantage.

“It’s all so professional now, you even look at the club scene with the likes of Kilcoo and even the top teams in Monaghan like Scotstown, Clontibret and Latton, they’re very into it. But in order to be into that, you need to bring that to lads from when they’re 16 or 17, but our facilities just aren’t what they need to be at
the minute to drive us to that next level.” 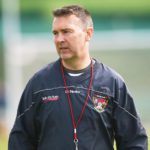 Injury blow for Inniskeen as they struggle to recapture 2020 form