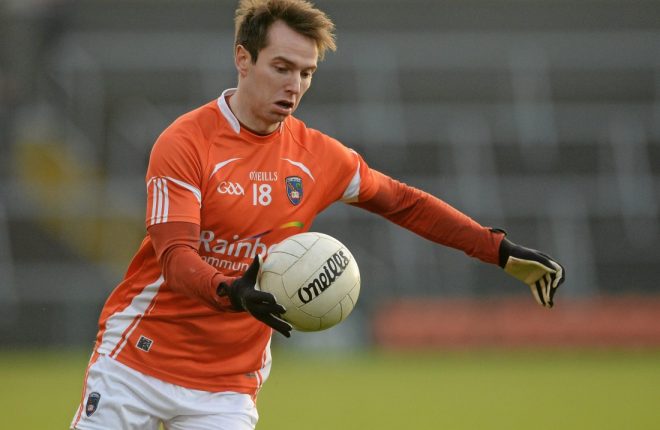 ARMAGH and Crossmaglen stalwart Tony Kernan won’t be hastened into any decision on his intercounty future.

There has been speculation that Kernan has decided to step away from his Armagh duties ahead of the 2017 season.

When contacted yesterday, Kernan said he was taking a break after the club season and that it would be at least Christmas before he makes a decision one way or the other.

If Kernan does decide to step aside, it would represent a significant blow for Kieran McGeeney as he enters his fourth year in charge of the Orchard County, who face the unappetising prospect of Division Three football in the spring.

Kernan is one of McGeeney’s most loyal footsoldiers and finished as their top scorer in their run to the All-Ireland quarter-final in 2014. The past two seasons haven’t been as successful, while off the field he has a busy lifestyle as a Chartered Retail Surveyor with Lambert Smith.

It was reported that he trained regularly during his honeymoon in Thailand and Australia in preparation for Crossmaglen’s ill-fated All-Ireland semi-final against Castlebar Mitchels.

Whether those factors play a part in his eventual decision is up in the air but Armagh fans can take solace in the recent news that this year’s captain Ciaran McKeever will be back next season, while veteran defender Andy Mallon is also expected to return.