IF St Eunan’s are to be competitive in the senior championship then they must have a deep squad.

According to manager Rory Kavanagh they are well on their way to meeting that criteria. During this year’s league campaign they have used the competition to test players, try men in different positions and generally create a situation where the management have a lot of options. That experience has left them feeling positive ahead of the upcoming senior championship which throws in this weekend.

Manager Kavanagh said: “For us it has always been about developing players. We have been happy. Now we turn to the championship and we want to go as far as we can. We have been very close in the last few years. Last year we were beat by a point by Glenties. The year it was something similar. The year before it was quarter-finals. The margins of loss have always been a point or two. So for us it has always been about bridging that gap.”

St Eunan’s completed their league campaign two weekends ago. They played nine matches and finished second in the division behind Naomh Conaill.

For manager Rory Kavanagh, the positive was not the result or the finishing position.

“We got to look at a lot of players, and players who have not had much senior football experience. To bed them in was good. We had six lads who were involved with the county u-20s, three with the seniors and a couple with the county hurlers. So we had 11-12 who were on county duty for a good part of the season. That presented difficulties as well.

“The positive was that we were able to give game time to fellas. We would have loved a pre season to do some proper work in terms of tactics. We were going into league football without time to adjust tactically. We are almost going from memory in the year before.”

They had to wait until they got their county players back before they could properly start working on tactics and structures.

Kavanagh says he is confident about what his strongest team is.

With Naomh Conaill doing so well in the league the expectatio n is that they should win this year’s title. They were due to play a refixed 2020 final on Wednesday night after the initial win a few weeks ago was appealed due to too many subs being used by the Glenties club.

Whatever happens in that game, they are expected to be the team to beat in this year’s championship.

Kavanagh said: “They are the top team on merit. They will take a lot of stopping. They are up there in terms of their playing squad. They have a big pool of players. They have a manager who has been with them for four or five years.

“They have that continuity and understanding of their game plan built up. It shows on the pitch. They are a tight unit. They play a certain way and they are difficult to break down. They are going to take a lot of stopping.” 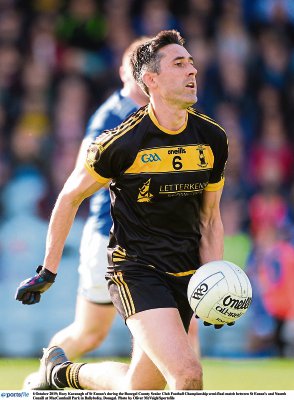