Advertisement
HomeCountiesDerryJoe Brolly: The GAA – winning has nothing to do with it
Advertisement 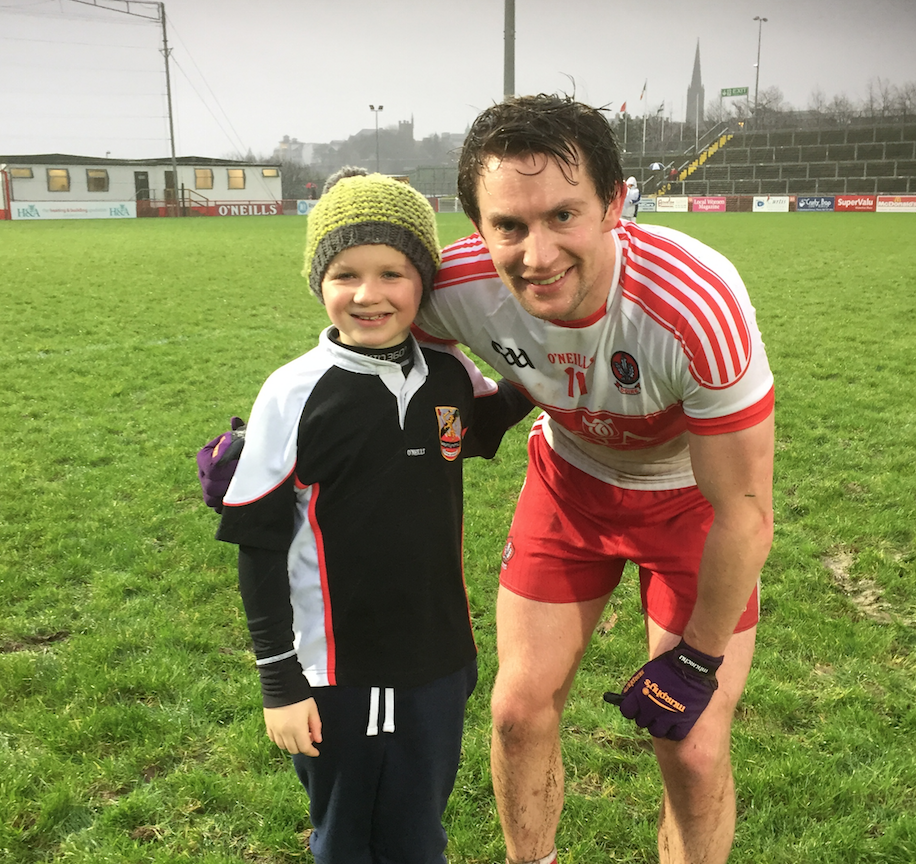 IDOLS...Joe Brolly Jnr with James Kielt after the Derry-Fermanagh game 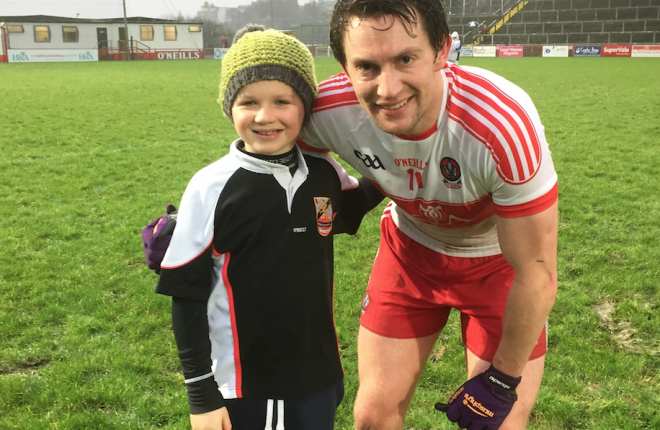 AT half time on Sunday in Celtic Park, the tea-room was filled with familiar faces. I love that familiarity of the GAA. We are, as I once said to Peter Robinson, bigger than the Masons, without the funny handshake.

Joe junior chatted and ate chocolate eclairs with the Deputy First Minister (“Q. Did you ever play football? A. I did other things in my spare time son.”).

My father and I chatted with one of the Mahons, who told a story about getting Brian Mullins’s shirt off him after an All-Ireland semi-final against Derry in the seventies. Years later he bumped into Mullins at a club function in Carndonagh and Mullins asked for it back. “He was deadly serious. I just told him I’d lost it. He wasn’t wan bit happy.”

Big Pearse McGonigle was one of the stewards and hit me the customary friendly slap on the back, knocking me forward a yard or two. Pearse has stood on the gate at O’Cathain Park for years, collecting the admission fee and helping out with whatever needs doing. He must have been promoted. His brother Mickey has been the chairman of the hurling club in the town and like Pearse, helps out without question. When they did up the lounge in the clubhouse over a decade ago, Mickey was one of the volunteer tradesmen who worked round the clock to get it ready.

A few months ago, I was chatting to the great Dave Hickey, the father of the organ donation system in Ireland and a man who has given his life to others. He had been offered a hugely lucrative job in the Middle East. He said “I’d go if it wasn’t for the football. The GAA is the only thing worth staying for in this kip. The rest has gone to hell. ”

When Niall Hassan died last year, his wife found amongst his hoard of cuttings a newspaper obituary of my grandfather Joe Brolly, entitled “The Most Remarkable Man in Dungiven Parish.” I was a year old when he died in a work accident. A badly shorn up trench collapsed, suffocating him.

The obituary, written by Seamus Hassan, is extraordinary. “The Greek philosophers tell us that a man should be judged not on how he spends his working time, but how he spends his leisure time. For Joe, his leisure hours were his very life.” It describes his life as a communitarian, disinterested in money and material things, passionate about his club and his neighbour. The author describes how at his wake, one illiterate man told him “I wept. I have lost a great friend. He filled out my forms for me. He even wrote my personal letters.”

There are some delightful flourishes. My grandfather was not a saint. “ Joe was a bonny fighter, who loved to lay an opponent by the heels and dearly loved the telling.” And when he got drunk, my grandmother would lock him in the coal shed. In 1943, he and Joe Beattie spent £5, 16 shillings and 8 pence on a second hand set of jerseys from Ballymena Rugby Club. It might just be the best fiver ever spent.

By 1947, we were the county senior football champions, training and playing in Robert McGonigle’s field. On the 1st of August 1953, when the same two heroes bought O’Cathain Park for £800, we were no longer homeless. I was born in June 1969. A fortnight later, Francie Beag McCloskey, a well-loved 67 year old local farmer, was batoned to death by RUC men in the doorway of Hassan’s shop on the Main Street. He was the first fatality of what came to be known as The Troubles. His wanton murder changed things forever.

In our back garden in Station Road, my father erected a set of posts from logs. Before every game, I insisted the national anthem be sung. Then, we would play 15 or even 20 a side late into the evening until we were called ashore. I provided a running commentary a la Michael O’Hehir. (“This man is a ball of fire” etc). Mickey McGonigle was always on my team because he wasn’t just a fine player but an excellent fist fighter. When it cut up rough, Mickey kept me right. I remember a fearsome bust up between himself and Paul Czar McCloskey once. Mickey’s shoe came off during it and somebody stole it.

My father Francie was detained at Her Majesty’s pleasure in 1972. She must have been very pleased with him, because she kept him a good long time. After he was taken, my mother was left with three young boys. The town and the club rallied round and in truth, I hardly knew he was gone. She was the infant teacher at St John’s primary school.

We were continually harassed by the soldiers. I remember being stopped on the way home after school one afternoon. The squaddie said “Pull your car over love.” “No” “Pull your fucking car over” “No.” By now, the traffic was backing up behind us on the Derry road. “ Alright love, get out of the fucking car and get the kids out.” “No.” He went to reach for me and she said “Don’t lay a finger on that child.” By now, people were honking their horns in protest. The soldiers had their guns raised. “You’re Francie Brolly’s wife aren’t you?” he said, “ We know all about him.” “Funny” my ma said, “ he knows all about you too.” People were roaring at them by this stage. Some were getting out of their cars. The soldier knew he was beaten and let us go. No point arguing with a Tyrone woman.

One afternoon in 1975, three years into his internment without trial, Mary Kathleen Groogan arrived at our door breathless with excitement and said “Anne, you have to pick Francie up at Long Kesh.” Mary Kathleen was the only person we knew who had a phone.

I remember sitting on his knee that evening in the kitchen as he ate a tin of oxtail soup. Later, like his father before him, he became chairman of the club and like Joe, has devoted his life to the community. As Seamus Hassan put it “one of those men whose vocation begins and ends on the village street.” 78 now, he takes music and Irish classes in the club and the house is an unofficial Citizen’s Advice Bureau, where he fills out forms, dispenses advice and tortures me with a bewildering array of legal queries.

And on a Sunday, we go to watch Derry. Proof, if proof were needed, that when it comes to the GAA, winning has nothing to do with it….