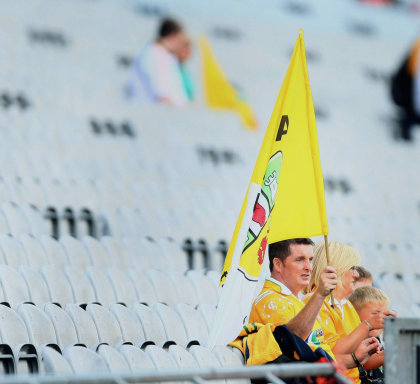 After an excellent, stimulating nationwide debate over the last two years around the urgent need to reform the championship, the best the GAA hierarchy could come up with was…… The bloody Tommy Murphy Cup. Or as it came to be known, The Tommy Cooper Cup. Here’s how it would have gone in the Ard Comhairle:
“Lads, we need to be seen to do something.”
“Not too much but.”
“Oh Jesus no, we don’t want a fuss at congress.”
“There’s only one thing for it so… (laughter around the table).”
“Jesus lads I can’t keep a straight face here (more laughter).”
“F*** me the Antrims and Wicklows will go mental.”
“You say it Mick I can’t.”
“The Tommy Murphy (hysterical laughter).”
“Jesus we better not call it that. (more laughter).”
“Any suggestions lads?”
“What about ………. The “B” championship?”
“That’ll do rightly.”
“Right, bit of lunch boys?”

In 2007 and 2008, I helped out with Antrim. In both years, the team reached the Tommy Murphy final, losing to Wicklow in a minor classic in 2007 before beating them in 2008.
The competition was treated as an embarrassment by the GAA. The final was played on All-Ireland quarter final day at 12.15. Only the quarter finalists could drive their coaches inside the stadium, dropping off and picking up the squad and kit at the door of their dressing rooms.

The Tommy Murphy finalists, meanwhile, had to park outside and carry all their gear in. The teams and run-down occupied a page of the program and were set out in small print, exactly like the mini sevens played at halftime. They were allocated the juvenile dressing rooms, where it was a squeeze.

Meanwhile, the main dressing rooms were reserved for the four quarter-finalists. These are very large state of the art rooms with a huge warm-up area and all manner of facilities. In fairness, there were no signs on the water faucets saying “Not to be used by Tommy Murphy teams” and the players were allowed to use the toilets. The All-Ireland finalists each receive over 100,000 euro. The Tommy Murphy Cup finalists got zilch. No wonder it was labeled the Tommy Cooper Cup.

The ingenious Sean Kelly/Jim McGuinness plan, which touched every base and would have created a vibrant two-tier championship was ignored. The GPA’s plan was also ignored but that is no surprise since it was entirely elitist and its main selling point was that it increased the number of games and therefore revenue.

They said “We asked our members and they did not want to play in a second tier competition.” If you ask the wrong question, you’ll get a worthless answer. Owner walks into the Wickham Wanderers changing room and says “Lads, you won’t believe it. We’ve been offered a wild card slot in next season’s Premiership. Only thing is we have to play with exactly the same squad and manager. What do you think?” He won’t have time to turn before he’s covered in cheap champagne.

The novelty of playing at Old Trafford and Stamford Bridge will soon turn to feelings of humiliation and depression as they lose 8-0, 9-0, 10-0. Hopeless optimism is human nature. Take a hard-working club cyclist and offer him a place in next year’s Tour de France. He’ll take your arm off, then trail in a week after the others, in agony, wishing he was anywhere else but there.

The GAA needed to be radical and this was the time to go for it, since everyone accepts that the current system is wholly dysfunctional. The Kelly/McGuinness plan put it on a plate. It links the league, provincial championships, and All-Ireland series, and establishes a vibrant second tier All-Ireland championship.

The 16 top teams would compete for the Sam Maguire. The next sixteen would compete in the second tier, which I would call The Paidi O’Se. The top six teams in Division One and the two promoted from Division Two would make up the top eight seeds. The two relegated from Division One would be seeded 9 and 10. Number 11 would be the third placed team in Division Two. Number 12 would be the winner of the second tier All-Ireland from the previous year. The final four places in the top 16 would be reserved for the provincial championship winners. If the provincial winners are already seeded in the top 11 via their league position (a likely enough outcome), then the top 15 league teams plus the previous year’s Tier two winners would make up the 16 teams in the race for Sam.

The way it would all work is this: The provincial championships would be stand alone tournaments run off quickly. At their conclusion, the All-Ireland series would begin. It would be knockout, starting with last 16.

Seed one would play seed 16. Seed two seed 15 and so on. From the quarter final stage on, the Paidi O’Se games would be curtain raisers to the Sam Maguire games, ensuring big crowds. The finals would be accorded equal respect, played one after the other in Croke Park. Same perks. Same razmatazz. The prize for the Paidi O’Se winners would not only be the trophy bearing that fabled name, but also the team holiday and a guaranteed place in the following year’s Sam Maguire.

The league would become ultra competitive, with the option of drifting through it gone, since you could drop out of, or make it into the top tier for the All-Ireland series and/or the lower your position, the more difficult your opponent in the first knockout game. The Kelly/McGuinness plan suggests a toss of the coin for home venue for the last 16 games. Imagine Kerry coming to Healy Park in Omagh?

The “B championship” proposal is a total cop out. The reasoning behind it is to provide more competitive games for Division Four teams and to incentivise them to be better in the longer term. But exactly the same reasoning applies to Division Three.

Instead, the GAA has decided to do worse than nothing. It is not in the least bit stimulating for players to compete in a bargain basement tournament against teams they play all the time, where the prize is entry to next year’s qualifiers.

The immense lack of respect to those counties is demonstrated in the offhand way the motion has been drafted. After the basic motion is set out (see above), it continues “ In the event of this proposal being accepted, ways of making the All-Ireland Senior B Championship attractive to participating can be considered.” ie we couldn’t be bothered thinking it through at this stage, sure we can cobble something together in due course, maybe send the winners on a holiday to Butlins.

his plan not only stigmatises the weak and cements inequality, but also takes away the dream of Sam for fellow Gaels that train every bit as hard as Kerry or the Dubs. And it does it, as Tommy Cooper might say “Just like that”
comment@gaeliclife.com