CONOR Glass watched last year’s All-Ireland Club final in the Hogan Stand Bar in Moneyneena and he’s now 60 minutes away from walking up the steps of the stand it’s named after to collect the Andy Merrigan Cup.

Glass kicked his 10th point of the campaign as Glen accounted for Maigh Cuilinn on Sunday in Croke Park and while their mantra was a case of one step at a time, there is an inner belief.

“We knew the capabilities we had and if we bring our performance on any day we know we’ll put it up against any team in Ireland. We have shown that now and we have one more to go,” said Glass who pointed to the size of last Sunday’s opponents.

Glass felt Glen’s win over Cargin gave them a taste for facing a team of six footers, but that his side “had the legs” for Croke Park.

“Maigh Cuilinn, I’d say 70 per cent of them were above six (foot) two or three, so that brings a different challenge completely,” he said. “It is a credit to them, they pushed us the whole way and thankfully we had that lead going into the final couple of minutes.”

A hallmark of Glen’s game was how them imposed themselves on the Connacht champions by playing their own style of play with Cathal Mulholland coming out on top of his duel with Seán Kelly.

“We know the game we want to play, but you have to tailor that to the opposition, know where their strengths are and where there weaknesses are,” Glass added.

“We felt we did that most of the day. We probably let them into it near the end. We had a five-point lead going into the last five minutes and took a bit of a backward step and went into our shell a bit.”

The Derry star felt Glen didn’t get the balance of the decisions from referee David Gough who he rated as “below average” but admitted it was out of their control and they kept “trucking on” during the game.

“If you back chat, he is not going to change his decision,” Glass said. “All of our team is mellow enough, I guess we are a bit older and can deal with those decisions if they go against us.”

Looking ahead to their opponents on Sunday week, Glass said Kilmacud Crokes are a “serious team” and accepts Glen will wear the underdogs tag.

“We haven’t had that all year. Aye, it’s a different challenge in itself. The bookies are out of our control,” he said.

“Kilmacud would say the same thing, we are both on a level playing field coming into this game and we are ready to go head to head together.”

Glass made a full length block in the win over Kilcoo, something that was dripping off Glen’s performance on Sunday. He puts it down to the players’ commitment to the cause and to each other.

He referred how defender Ryan Dougan bounced back the dummy Ruairi Canavan sold him in their win over Errigal Ciaran, a snipped that went viral of Dougan ending up on his mouth and nose on the Celtic Park sod.

“That’s just the commitment he has…to be able to do that night on night and to have that self-confidence to just go for it – that’s what we pride ourselves on,” Glass said of Dougan’s two blocks on Sunday.

“We are a good footballing team but defensively we are sound and we do everything I guess to get the ball turned over.” 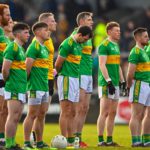 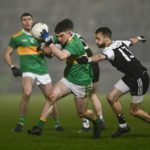 Another battle of fine margins