All Saints Ballymena, London and Antrim

Teresa Halbach so I can ask her what the helll went on and who actually, if at all, killled her.

For Ballymena we always go to The Slemish bar in town it would be the GAA bar in Ballymena. If the single lads were looking to pull it would Gillie’s.
After Antrim games it would be the Whitefort, then Catherdal Quarter, usually Ollies and always Thompsons.

Probably having a social life, going on holidays and going out with my mates.

My first year on the squad we trained in Allen Park in Antrim. The pitch had no posts and was like a dirt track. Our trainer at the time, Paddy McNeill loved it because he just ran us round it.

Peninsula gloves and half socks, Adidas boots and Skins. (Hopefully Skins see this and send me some stuff)

There’s a few. Conor Murray is always up to no good, Chris Kerr is always messing. We were playing Down last week and Niall McKeever drove us around the roundabout outside Pairc Esler in the wrong direction. Niblock and I thought it was the end of us.
Peter McNichol is a messer for Ballymena. He’s the Facebook advertising king. Check out Peter McNichol – FB expert.

Paddy McBride, although he is single he’s always making friends with girls on Facebook. Himself and Paddy McAleer managed the St Mary’s university girls team this year. They say it was for the CV but everyone knows it  was for the girls. They based their team selections on the fittest players and it was nothing to do with training fitness.

Micky Armstrong. He’s spent more time on the physio table than the pitch especially when its a running match. Pure bluffer.

‘The Toomebridge Pirlo’ Mick McCann, if he’s not checking out his Crossfit physique he’s looking at his new skinny track bottoms. He loves the skinny bottoms.

Mick again. He’s nuts in his sleep. People are actually scared to room with him.

Conor Murray loves sweeties and he snap-chatted his dinner one night and it was tinned beans with sausages in it.
Best diet is Mark Sweeney only so fits into a small T-Shirt when he’s on the hunt in Coppers.

Enda Muldoon. He can field a ball and is good of both feet and he’s quick.
He still gives me nightmares.

Paul Coggins – “I want ye to play like ninjas today lands, like ninjas in the forest runnning around free.”

Paul Coggins for his enthusiasm and self belief in every play, it was contagious.

The second game last year v Fermanagh. Even though I was sent off in the first, I had a terrible game the second day. The sending off played in my head too much.

Antony Tohill. My Granda played with Derry and he brought me to all the Bellaghy and Derry games at that time and Tohill was always my favourite.

Out- Chris Kerr. I’ve been full back the last few games and my head is killing me from his shouting. I’m hearing ‘I’ve seen them missed’ and ‘he’s a muffler’ in my sleep
In- James Loughrey. He’s ours anyway 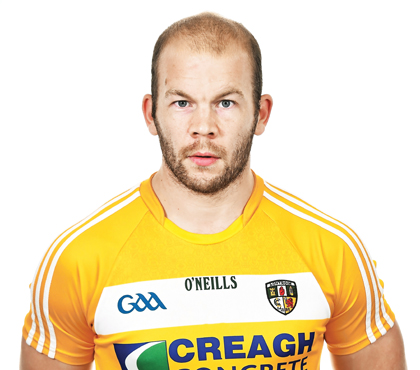