SEAMUS Ryder breathed a huge sigh of relief at full time as a late Erne Gaels rally snatched a much-needed draw in their first-round clash with Belnaleck on Sunday.

“I was happy enough with the point, in the end, up,” said Ryder.

“It was a good result with 14 men and three points down, with 10 minutes to go.

“I was probably not happy with the overall performance, but hopefully that will come against Teemore.”

Erne Gaels travel to Teemore on Sunday, and with the Shamrocks in need of points, Ryder is aware of the challenge that they will face.

“We are expecting a big battle in Teemore,” he explained.

“They ended up well beaten today but probably not playing Division One football and going straight in against Derrygonnelly was always going to be tough.

“They performed well enough in the first half and that will give them confidence.

We definitely won’t be taking anything for granted heading up there.”

Belnaleck dominated large parts of the game on Sunday, but relinquished a three-point lead in the last 10 minutes to only end up with a draw.

Manager, Colm Bradley, had ‘mixed emotions’ after the game.

“We should have closed it out,” he said. “We were three [points] up with a man advantage and we didn’t get over the line.

“By the same token, they [Erne Gaels] had the momentum in the last five minutes, so it could have resulted in a loss for us.

“Overall, we were very pleased with the workrate and effort and some of our play. Decision making and execution was off at times, but the conditions really were mitigating.”

The Belnaleck boss was in Canon Maguire Park to watch Derrygonnelly’s first-round victory over Teemore and he is expecting a tough challenge this weekend.

“Derrygonnelly were very impressive against Teemore.

“I thought some of their younger players showed up well which tells me that the conveyor belt is still very much working.” 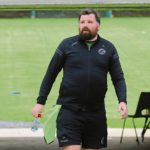 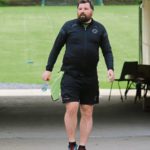