ENNISKILLEN Gaels manager, Simon Bradley, was delighted to get out of Roslea with another two points on Sunday evening.

“Roslea away was going to be a tough game for anyone in the championship,” he said, “It’s a very hard place to come and get a victory.’

“We aren’t happy with our first half performance, having only hit three scores. We worked hard all week on a few things and it paid off in the second half. Roslea is a very proud club with a traditional style of football that everyone knows what to expect when they get here. We felt we dealt with it reasonably well given the amount of high ball that was put in.”

Bradley was at Saturday evening’s game between Ederney and Kinawley and knows the threat that lies ahead this Saturday.

Going into the last round games he feels that Kinawley are justifiably one of the best teams in the county.

“This was the plan at the start of the campaign to be in this position going into the last game.They came from behind against Ederney away from home which shows real character.

“The two Corrigan’s up front are the focal point and we will have to be well prepared for them. We know it is going to be a tough ask.’

For Roslea manager, James Kavanagh, it was a case of another hard luck story for Roslea after they kept themselves in the game against Enniskillen for long periods only for some wayward shooting to let them down.

“We conceded some bad goals at some crucial times. I felt we played all the football in the first half but yet we were a point down at half time, after missing some easy chances.

“We felt things were going to plan in the first half, but after half time the Gaels got vital goals and were more ruthless than us.” 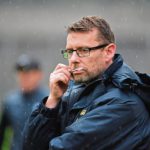 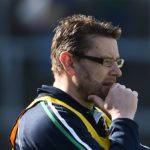 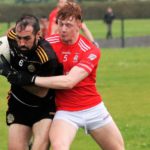