EDERNEY’S league form has been patchy by their own high standards, but manager Mickey Cassidy will hope that they can concoct something special for Friday night’s eagerly anticipated quarter-final clash against Derrygonnelly.

This is a heavyweight contest between the two teams who made up last year’s final pairing. In that instance, Derrygonnelly’s six in-a-row bid was derailed by an Ederney team who were hell bent on ending their 52-year wait for the New York Gold Cup.

Time will tell whether it was a mere blip for the Harps, and they’ll undoubtedly have revenge in the forefront of their minds heading into this weekend, but Ederney too have plenty of motivation heading into this year’s championship as they’ll want to show that they’re no one hit wonders.

Their returning manager Mickey Cassidy is a little concerned, however, that they failed in their bid to make the league title, finishing fourth in the table. Hopefully it isn’t a sign of things to come.

“We haven’t had the best league campaign. We’ve just had that sort of year where things haven’t gone as we’d have liked. But we’ve knuckled down and we’re trying to get things right for Friday night.”

Derrygonnelly are 13 favourites to progress this weekend, and they’ve had an exceptional season to date, winning the Division One title in convincing fashion against Enniskillen Gaels. Garvan Jones, who has returned this year, scored their second goal in a 2-8 to 0-7 victory, while Tiarnan Daly and Aaron Jones were exceptional in the full-back line. They’ve won five of the last six championships in Fermanagh, a de facto dynasty, and if league form is any indication, they’ll take some stopping.

Cassidy said: “They’re going well and I think they’re actually stronger than last year, Garvan and Leigh Jones are back. They’ve introduced a lot of young lads. Fringe players on their panel who have been about for a while, have been bedded into the senior team.”

Both teams have some injury worries heading into this weekend – Derrygonnelly forwards Conall Jones and Gary McKenna, as well as defender Declan Cassidy have picked up knocks and face a race against time to be fit for their championship opener.

For Ederney, Stephen McElrone is sidelined with ligament damage while Pol McKervey is a doubt after recently breaking his hand. On a more positive note, they have some younger players making their mark this season, like Eoin McKervey, Evan Corrigan and Eoghan Donnelly.

Cassidy said: “We’ve had a few new players coming in and they’ve done well in the league, it’s important to give the younger lads a chance, it’s the only way they’ll improve and mature. They’d definitely be in with a shout come Friday night.”

Of course, Ederney can also call upon some vastly experienced campaigners. Fermanagh legend Martin McGrath is still going strong (he was man of the match in last year’s county final), while county star and team captain Declan McCusker is always key to their plans. On top of everything else, they’re tremendous role models to the young generation of players.

Cassidy said: “Martin knows how to manage himself at this stage and Declan McCusker is a good example to any young fella as far as training is concerned.” 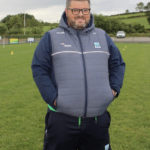