FORMER Down star Darragh O’Hanlon has called time on his playing career at the premature age of 28.

O’Hanlon has endured a torrid time with injuries over the course of the last few years and has made the difficult decision to call it a day with both club and county.

Darragh was renowed as a talented and hard-working player who jointly captained Kilcoo to the club championship title in 2016 and 2017. He also played a full part in Down’s memorable run to an Ulster final defeat against Tyrone in 2017.

However, consecutive injury setbacks meant that he was sidelined for the last few years, and he released a statement this afternoon confirming that he has retired.

He said: “Unfortunately I have been forced to hang the boots up for good at the age of 28 as the body can no longer take much more. In the last three/four seasons I have gone through spinal surgery and two serious knee surgeries.

“In the last few days I have had a brace fitted to wear most of the day to tide over until we get married in April and after that I am due to get major knee surgery.

“As much as football means to me in this life it’s emotionally and physically tough to let go especially when it has been a massive part of my life since a very young age. Watching Kilcoo especially do so well I think what could have been but that’s life and not everything ends in a fairytale.”

Kilcoo players Crissy Rooney and Niall Kane were among those took to Twitter to comment on O’Hanlon being ‘a Kilcoo legend’ and ‘one of the best’.

Down GAA Chairman John Devaney also commented on O’Hanlon’s career and a ‘significant’ contribution to club and county.

“Perhaps his finest days in the red and black were as a central part of the team that reached the Ulster Final in 2017,” read a statement on the Down GAA social media.

“It’s a shame that injuries robbed him of the chance to build on that, but he showed admirable determination in trying to return to play.” 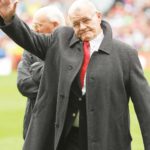 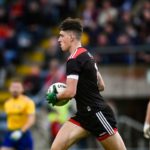 Coulter tips Smyth to move instantly into Down team