Fionnuala Carr said that Down's resurgence is thanks to the senior players. 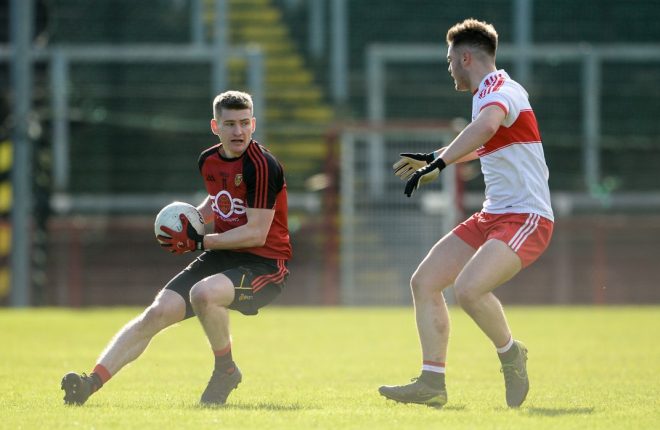 This past two weeks has been a bit of a change for Down supporters of late with two good victories over Meath and Derry.

This was in stark contrast to the first two games where they were comprehensively beaten by both Fermanagh and Clare who would have been perceived to have been two of the teams where it would have been easier to pick up two points?

So what actually changed for Down?

There have been so many people within Down who have had opinions on the demise of Down football, management, county boards and former stakeholders have all been blamed.

For anyone who doesn’t follow Down or the GAA they would have assumed that the turnaround was because of a major change in personnel or management but in reality this wasn’t actually the case.

I was at the opening two games of the year and one of the things that I remember most is the attitude of one of the players when they were asked to come on against Clare, a big yawn, slowly getting up of the seat and walking down the steps with their hands in their pockets spoke volumes about where Down where at.

Players took on more responsibility and assumed leadership roles in order to motivate and galvanise those around them.

Two swallows don’t make a summer and Down haven’t become All Ireland contenders overnight, they haven’t even guaranteed themselves survival in Division two yet but they have shown that they have some fight in them.

Two of the remaining three games for Down are at home and if they can manage to pick up two points from six then they should guarantee safety in Division 2 for 2016.

On a separate note and what was in the week leading up to International Women’s Day and the Ulster GAA Empowering Female’s conference it is fitting that the Slaughtneil camogie team won their first All-Ireland Senior Camogie club final.

While many of us have looked on at envy on the journey that Slaughtneil GAA club have went on this year, it has one that has been filled with great sadness with the passing of Thomas Cassidy who by all accounts was a hugely influential person for everyone involved in the club.

Picking themselves up and driving on to achieve success in the Ulster final and All Ireland final is a testament to the girls themselves and the incredible support they have received from their club mates.

The Cassidy sisters Aoife, Eilis and Bronagh played an integral roles along with Shannon Graham and Louise Dougan.

To win any All Ireland final is a special achievement but for the Cassidy girls and the club in particular to have done so just four months after their father passed away shows a strength of character and unity that is synonymous with the club itself.

I would like to pass on my sincere congratulations to all the club on their fine achievement and also commiserations to Eglish who despite a heroic effort fell just short of achieving their dreams.

A quick reminder to every one of the Empowering Female Sport Conference which will take place tomorrow in the Armagh City Hotel. The conference will touch on important subjects including Strength & Conditioning, Mental Health Awareness, Disability Inclusion and player retention.