WHEN Daniel Guinness casts his mind back to the summer of 2019, it’s little wonder why he’s so desperate for Down to achieve promotion from Division Three and therefore take their place in the Tier One Championship later in the year.

The 21-year-old made his championship debut in an absolutely enthralling provincial derby against Armagh, and he played in an equally memorable qualifier clash against Mayo which brought the curtain down on their season.

Down may have lost both matches, but the glamour ties would be fewer and further between unless they manage to wriggle their way out of Division Three this year (the exception to the rule being if they make the Ulster final).

They’ve made a good start to that end – snatching a draw against Tipperary before carving out a gutsy win against Derry – and Guinness says it’s no coincidence that they’ve hit the ground running as they look ahead to their toughest test to date this weekend, an away trip to Cork.

Guinness said: “There’s no getting away from it, we’re looking to go up. It’s a huge aim for us so that’s why we’re trying to hit the ground running and we’ve earned a draw and a win against two tough teams.

“We knew it was going to be a very tough start so we got in a good block of training as we really want to avoid playing in Tier Two. We played the likes of Mayo and Armagh at home last year and that’s where we want to be at.”

Cork have been labelled as a bogey team for what it’s worth (and it might be worth quite a lot if you ask Armagh after they were beaten once again by Laois last weekend). Perhaps more pertinently, they’ve made rapid improvements over the last 12 months and they’re the only team in Division Two with a hundred percent record after two matches. Ciaran Sheehan, a member of the 2010 All-Ireland winning team, is back this year as well and played some great stuff in their comfortable victory over Leitrim at the weekend, so it’s not going to be an easy one for the Mournemen.

“Everyone will get the head down this week and work hard in training on where we can possibly exploit them. All we’re thinking about is Cork, that’s literally the focus all week for us. It’s a nice one to be playing down in Pairc Ui Chaoimh, it should be a good experience.”

Down’s victory over Derry was notable for the return of their Kilcoo players including Jerome Johnston and Paul Devlin, who both started the game despite only returning to training the previous Thursday night.

Guinness – who is from Carryduff and therefore removed from some of the heated rivalries in the south of the county – says he was delighted to see the Magpies do well, and hopes his own county can emulate their achievements in future years.

“I always want to see Down teams well and obviously I know some of the lads personally. Hopefully it’ll inspire Carryduff, we want to reach the top in Down. I think we’ve potentially the squad to do it so it’s something we’ll be aiming towards.

“There’s a good few of the Kilcoo lads about the panel and they’re quality players. It benefits everyone, both Down and Kilcoo. They had a super year – getting to the All-Ireland final was no mean feat so it’s great to have them on board.”

While Down are by no means the finished article, and had to dig deep to see off a wasteful Derry side on Saturday night, their resilience is still to be commended. Guinness says there’s a great spirit in the squad at the moment, and that was very much in evidence against both Tipperary and Derry.

“I suppose the team has been fairly tight-knit this year, a good few of the boys came in last year and we were maybe getting to know each other and I think we know each other a bit better now.

“There’s a few fresh faces too, when you get a close win it brings everyone together and has been a feature of this team.”

Guinness also points out that they’re doing a little better than they were this time last year which bodes well as they only narrowly missed out on promotion on that occasion.

“When you look at it, we’re a point better off than we were last year as we were defeated at home to Laois.

“Every point in this division is huge because it’s so competitive. Getting a win over a rival for promotion like Derry in a tight game was a big result for us.” 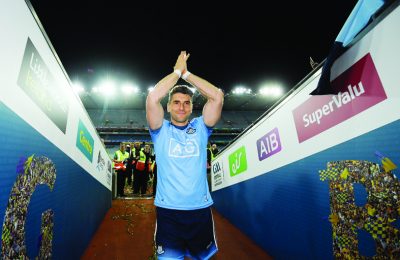