ROSTREVOR are favourites to win the Down Intermediate Championship this season, after a surprise relegation from Senior football in 2021, and they got their campaign off to a winning start, defeating Liatroim 0-13 to 0-10 last Saturday.

Whilst the ship seems to be steadied now, this year hasn’t been the easiest for the new management team of Benny Coulter, Aidan Cole and Neil Coulter, as their team were one of the four relegated from Division One in Down.

Despite that, assistant manager Cole feels that the team finished the league strong and built momentum heading into the championship.

“We took over at the start of this year, and our main aim was to remain in Division One,” he said.

“But we got off to a very difficult start, and it took a while before we picked up our first win. We thought that we were training and playing at a good standard, but we weren’t converting that into points, so to be honest, the mood in the camp was fairly low after seven or eight games.

“But momentum built as the year went on and we learned a lot about our players, about their qualities and strengths. When you’re starting from scratch with a team, it can take a period of time at the start of the season to learn where your strengths and weaknesses are.”

In the Intermediate Championship, of the 16 teams who compete, Rostrevor were the only team who played in Division One in the league and consequently have been labelled by many as favourites to win the competition, and Cole says that the team are happy to take on that tag.

“We have been fairly honest with the guys, and we don’t shirk the favourites tag,” he said.

“We know that we’re on a pedestal in terms of us being in the only Division One team in it, coming up against Division Two and Three teams. We’re not shy about saying that our objective is to win the Intermediate Championship.

“We’re not naïve – we know that there are some very good teams in this tournament, but after a full season in Division One, we feel as though we’re in a good position to win the championship.”

However, despite their expectations, they had a difficult start to their championship campaign. They trailed Liatroim by three points heading into the final quarter, but were able to convert six unanswered, whilst their opponents missed a number of goal chances, and they edged over the line.

“Liatroim were a bit of an unknown entity to us, having just survived Division Two,” said Cole.

“But to be honest, we were a bit disappointed with our first half, and start to the second half, because Liatroim were playing the better football. They were set up well, and tactically they were very sound.

“But our fitness and experience, particularly from our senior players such as our captain Shaun Parr, and Johnny Parr in nets really got us over the line. To come away from Páirc Esler with six unanswered points towards the end of the match, was pleasing for us.”

After Monday night’s draw, Rostrevor know that Clann na Banna lie in wait after their first round victory over Annaclone, and Cole believes that once again, the south Down side will have to live up to expectations.

“Again, the favourites tag will be strongly with us, but we’ll accept that,” he explained.

“I think we need to concentrate on ourselves, in terms of how we can play at our best, and how we can progress, hopefully all the way to the final.” 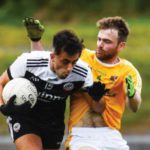 Down Club Championships get underway