Warrenpoint have been dealt a massive blow heading into the business end of the season as Ross McGarry looks set to miss out through injury.

Manager Shane Mulholland confirmed the star attacker broke his jaw during an “accidently collision” in a training session last week.

“Ross had an operation after an accidently collision in training last week, he’s broken his jaw in three places so we’re likely to lose Ross for the rest of the season, so that’s a major blow for the group,” said the Ballyholland native.

“He’s just got married, he’d missed a couple of games ahead of his wedding and then he was only back a couple of weeks, and this happened in training.”

Warrenpoint are currently top of Division 1B but with four relegation places at the bottom of the table, they’re still not mathematically safe just yet.

“It’s very competitive, there’s three games left, and we would have hoped at this stage that we’d have been out of relegation trouble, but we just can’t take it for granted. We’ll probably have to win one more game just to make sure.

“We won the league last year and it was a big thing for Warrenpoint. Maybe for some people it was devalued because of Covid, and it was
a shortened league, but
Warrenpoint had never won a senior trophy, so it was quite a big deal for the players.

“In the last three weeks of that season, we played six games and it’s not an excuse for our championship performances, but we were very focused on winning the league.

“Whereas this year it’s all about the championship and we’ve set our stall out on that basis. We didn’t want to be in 1B, we wanted to be in 1A, but we are where we are.

“I just don’t want us to be involved in any messing about at the end of the year when we really should be starting to think about pushing on for the championship.”

Warrenpoint disappointed in last year’s championship and will once again be up against it as Kilcoo remain the team to beat in the Mourne County.

“Kilcoo had a lot of boys who have taken time out, gone traveling and all the rest of it and they still topped the Division One league and they’re in the Premier Reserve championship final so that tells you a lot about their mentality.

“In Down you have a backdoor so you could find that you need to beat Kilcoo twice in a season to win a championship.

“One time is hard enough but twice has proven to be very difficult over the last ten years.” 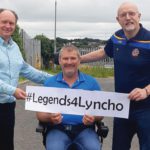