KILCOO are in search of more history this weekend as they take on Warrenpoint with the opportunity to win a tenth Down title in 11 years.

The reigning All-Ireland champions have been a juggernaut within their own county for more than a decade now, but that is not to say that it has been plain sailing for the Magpies.

In the 2021 season, they won the last four Down Championship matches they played in by an average score of just two points, compared to an average winning margin of 10 points in their run to their second Ulster title.

It’s been more of the same in 2022 with September’s quarter-final against Clonduff was the latest acid test for Conleith Gilligan and Richard Thornton’s side.

In that derby encounter, Kilcoo were able to cling onto the All-Ireland crown by their fingernails, winning on penalties.

“Every year of the previous three or four, there has always been replays and extra-time,” said Gilligan of the Down Championship.

“Last year we went into extra-time against Carryduff, and before that we went to a replay against Burren (2019), and last year’s final was decided by two points. So, the games in the Down Championship being very tight is nothing new; we expect that from all games.

“Against Mayobridge in the semi-final, with eight or nine minutes to go it was still only a two-point game, and our goal obviously changed the complexion of the scoreline.

“All the games in Down are very tight, and the goal is always to get to the county final, and to put yourself in a position where you can try and win it, but there are no guarantees, because it is very difficult to get there.”

The opposition in Sunday’s final are another side who Kilcoo have had close encounters with.

The Magpies saw them off by a single point in the 2019 decider, whilst in 2020 Warrenpoint beat Kilcoo in the Down Championship, before the men in black came through the backdoor, and got revenge in the semi-final.

This year’s version of Warrenpoint weren’t fancied by many to go far in Down with key men out injured, but they stunned Burren and will have hopes of stunning Kilcoo.

“They were the last team to beat us in the championship, and that puts us on our guard. We know how good they are; they have players like Ryan Boyle, Donagh McAleenan, Cormac McCartan and the likes, who are top-end footballers.

“Any day that you’re not at your best, they’re going to be very formidable.”

For all of Kilcoo’s many medals, they still refuse to take anything for granted between the four walls of their dressing room, as Gilligan believes, ‘nothing goes on forever.’

“You have to keep performing to stay at the top, and any day that you play in a final and you don’t perform – you don’t come home with the cup,” Gilligan said of the forthcoming final.

“So for us it’s just a case of being the best that we can be, because there are no guarantees and nothing goes on forever, but you have to bring your best to a final, and if you do that, you always have a chance.

“But nothing is given to you, you have to go and earn it, and it’s the same again.

“The cup is there, it’s sitting in the middle between the two teams, and whoever performs best of the two teams comes home with it.

“That’s the beauty of sport – you always have to do it on the day.” 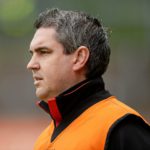