CLONDUFF edged out old foes Eglish last weekend to earn their first Ulster title since 2019. A super second-half display from Kieran McGourty’s side was enough to capture the trophy, with three points the difference in the end.

“It was a great game, Eglish put it up to us every step of the way,” said sharpshooter Paula O’Hagan, who finished the game with 0-6.

“At half time we needed to reset and just look at what we were doing, we probably lost our shape maybe a wee bit in the first half and Eglish were all over us. They were winning the rucks, they were winning the hard battles and they were coming out with the ball every single time. In the second half we set ourselves up a lot better, we were a bit more composed.

“Going in there was maybe a bit of nerves, the first touch wasn’t happening in the first half. Eglish, the team that they are, every time we play it’s a tight battle and they brought it right to the last minute.”

There was a lot of hurt in that Clonduff changing room at Páirc Esler. When the sides last competed in the 2020 Ulster final played last year, Eglish won at a canter, but that performance was rectified last weekend.

“Last year was a game we probably don’t want to think of. It wasn’t too pretty on our behalf, but you can’t take it away from Eglish, we weren’t at our game last year and they rose to the occasion and were all over us. That was in our heads, and it gave us that wee bit more hunger and we brought it today and it was a great game for the neutrals to watch.”

O’Hagan picked up the Player of the Match award for her performance, but suggests it was a real team effort that saw Clonduff over the line.

“Awards aren’t what it is about, if you look across the field there are many people who could have won that award and not just me.

“The main thing is that we got over the line as a unit and we will see who we play in three weeks’ time in the All-Ireland semi-final and hopefully we will go one step further. There was a lot of work that went into this year and a lot of work that went on behind the scenes as well and that is one thing, camogie is on the rise everywhere.

“And everybody is putting it in themselves, so we have got ourselves fit and up and ready and raring to go again and hopefully this isn’t the end for us yet.”

Clonduff out to reverse fortunes 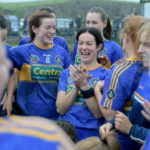 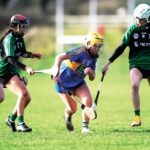