IT was never going to be anything else but goalkeeping for Cian Hennessy. He couldn’t miss.

The St Eunan’s hurlers’ netminder is a native of Kilmallock, for whom his older brother Barry won his third Limerick championship medal between the posts this season.

To complete a magical year for the goalkeeping family, their father Tom, also a three-time Limerick championship winning ‘keeper, is the current goalkeeping coach of Sleacht Néill hurlers who were top of their tree again in Derry. He has coached the Emmet’s camogie goalkeeper Jolene Bradley and Dungloe’s ‘keepers on their way to a Donegal title.

Growing up, Kilmallock was hurling central. From they could walk, the Hennessy boys carried hurls. During games, it was a ghost town. By contrast, pitches were thronged. The priest would shave mass to just 20 minutes to accommodate both the creed and their other religion – hurling.

“From watching him and it was just natural for us,” Cian recalls of their father’s influence. “I remember county final wins and you’d be down watching the training; we’d be pucking balls and you’d have grown up with it.”

When Tom hung up his hurl after 23 seasons, Barry inherited the number one jersey which he still wears.

Cian was unable to force his way into the team and with no other position interesting him, he took up rugby until the St Eunan’s chapter began three years ago.

“I wanted a change of pace and scenery,” he explains, about moving to live with his father in Downings. “He was training Eunan’s at the time and got me to come down to help with the goalkeeper there (Colm Breathnach) at the time,” Cian recalls.

“He handed me a hurley, helmet and gear and said ‘off you go in there and play’.”

It was followed by club stalwart Paddy Flood’s suggestion of a transfer and the rest is history.

With the next Letterkenny goalkeeper only in his late teens, Cian made a pact. By hook or by crook he was reigniting his hurling career.

“I just made the jersey mine and I am making sure as long as I want it, it is staying mine,” said Cian, who played in St Eunan’s 2019 and 2020 county final defeats to Setanta.

“In the first year I was up we played them in the final and they gave us a clipping. They showed us how to play hurling.

“Last year, we didn’t show up. They did beat us, but we didn’t come out of first gear. That was the frustrating thing and we started playing a small bit towards the end.”

Eugene Organ took over as manager this year. It was time to swap listening to the naysayers and get back to basics.

“We just knew that everyone was writing us off, but we knew that if we played the way we know we can, we could do it,” Cian explains.

After building up a five-point lead midway through the second-half, St Eunan’s managed to hold on for victory.

“That last 10 minutes was squeaky bum time,” Cian recalls. “Setanta kept coming and coming, but thankfully we held them out.

“I had a good connection with the boys in the backs. I am a very shouty ‘keeper and vocalise everything, I let boys know what is happening and have got used to me screaming behind them.”

“I can remember thinking ‘we’ve rattled them if he’s missing’ and that if we kept going, we’ve got them,” Cian explains.

“We knew we could (win), but we didn’t know until the day when we heard that whistle.”

It capped off a six-day period that saw the Hennessy family involved in four different championship winning teams.

“He worked extremely hard and delighted for him,” said Tom of son Cian eventually getting his rewards.

Sunday the focus switches to the Ulster championship and a trip to Armagh to face Camlough based Craobh Rua.

“We’ll take it game by game and see how it goes,” Cian suggests. “But we do feel we can go far, if we play our game and keep going the way we are. It is all on the day, that’s the joys of knock-out hurling.” 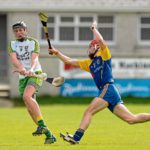 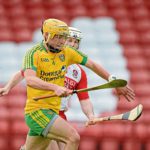