FORMER Donegal ace Brendan Devenney feels Saturday’s showdown with Tyrone will be a ‘fascinating encounter’ with the result hinging on the availability of players.

The St Eunan’s man expects Tyrone’s suspended quartet to be back in the selection mix and feels that Brian Dooher and Feargal Logan have a deeper squad at their disposal.

“It depends who comes back from Donegal; we were very light going down to Kerry,” Devenney stressed.

He points to the absence of Neil McGee, Jamie Brennan, Michael Murphy and Caolan McGonagle, the latter of whom Declan Bonner said is in a race against time for the championship clash with Armagh.

“Michael Langan was missing and he has been our best player this season,” Devenney stated.

“There are certain players in Donegal that make things work and certainly Langan and Murphy have been doing that around the middle. If they don’t play against Tyrone, it is going to be difficult.”

Devenney feels there is positivity around a solid defence but there has been chopping and changing in selection between injuries and Sigerson Cup commitments.

“It might’ve affected Donegal a lot more than others,” he said.

Devenney didn’t factor the away trip to Kerry as a winnable game, rather just ring-fencing it as a chance to get players games.

“Depending on what team Donegal have out, that will tell the tale. It should still be set up for a fascinating encounter,” he said of Saturday’s visit of Tyrone.

“With everything else that goes into Tyrone and Donegal, two points here could leave someone safe and the other side in trouble.”

During his playing days, the former Donegal attacker rates games with Armagh as their psychological battles, but the derby feel to their meetings with Tyrone was a leveller.

“In Jim’s (McGuinness) time, he earmarked them (Tyrone) as the team to beat in Ulster,” Devenney said.

“The big issue tactically was that (Mickey) Harte wouldn’t submit to all the way (defensively) whereas McGuinness was, until 2016.

“Jim left, but Donegal were still playing the same tactics under Rory Gallagher. It was the first time I saw Harte mirror Donegal and we had that horrendous Ulster final.”

Late points from Kieran McGeary and Peter Harte won the 2016 decider but Donegal have held the upper hand in recent years.

Devenney recalls talking to Feargal Logan after Tyrone’s championship win over Donegal last summer in Enniskillen that gave them ‘the bounce’ on their way to lifting Sam Maguire.

“Even in their (Logan and Dooher) first game in charge, Donegal controlled that game. The Donegal team knew that they were about and Tyrone were starting under new management,” Devenney added.

“Donegal were in a good place in the championship until that (Michael Murphy) penalty miss and you saw the start of that Tyrone season.

“Donegal had that hoodoo over Tyrone and you saw the bounce they got from that,” he added.

Saturday night is another installment. There won’t be silverware for the winner or a relegation spot for the loser, but there won’t be a backward step. 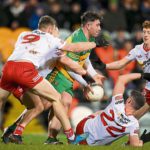