THE Dual Player of the Year award isn’t handed out for nothing, and the recipient of the award, St Eunan’s Kevin Kealy, can take pride in his accomplishments over the last 12 months.

He mightn’t have the same recognition as some previous winners of this awards, like Brendan Rogers and Chrissy McKaigue, but he played a massive part in St Eunan’s winning both the Donegal Senior Football and Hurling Championships in what was a remarkable season for the club.

Indeed, he was one of the only players who played for both teams, and his biggest moment in the season was his game-winning goal against Setanta in the Donegal hurling decider.

The centre half-forward also rattled the net for St Eunan’s footballers as they limped over the line, 2-9 to 0-14, in a dramatic final. Still only 22 years old, he can look forward to a bright future with a club that are thriving in both codes and down the age groups.

Also nominated for the award were Bredagh star Aislinn McFarland and Oisin O’Hare. Antrim ladies captain McFarland enjoyed a super year in 2021 as she helped the Saffrons claim the Ulster Junior Football title and led them to their fourth ever All-Ireland junior final after an extra-time victory over Carlow. She also starred for Bredagh ladies as they made the Ulster final, only to lose to Donaghmoyne after a replay.

Oisin O’Hare was recently named the 2021 Armagh Junior Hurler of the Year and is a member of the Armagh u-20 football team this year. He was a crucial part of the Craobh Rua success story last season, helping them to back-to-back county titles along with a historic Ulster title. O’Hare was also a star on the Carrickcruppen team that landed the Armagh Intermediate Football crown. 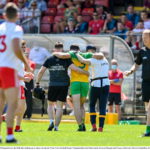 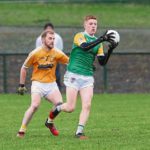