CLOUGHANEELY boss Michael Lynch is back for a sixth season in charge, and he says the desire to see how they fare in the Senior Championship factored into his decision to come back for more.

The Donegal side claimed last year’s Intermediate crown with a resounding 1-11 to 0-5 victory over Dungloe, and as a result they will take part in the top tournament for the first time since 2015.

It won’t be straightforward as the Donegal Championship is one of the most competitive in the province, with reigning champions St Eunan’s, Naomh Conaill, Gaoth Dobhair, Kilcar just some of the teams who will fancy their chances of going all the way later in the season.

The last time that they won the Intermediate Championship, they went straight back down again the following season, so Lynch is determined they deliver a better account of themselves this time around.

“This is my sixth year, it’s a right stint alright but I enjoy it, and the boys seem to be happy enough with the management team. We tried hard to get up to senior so we may as well stick around and see how we get on now we’re there,” he said.

“When we won the Intermediate title in 2014 we had high hopes of staying up but we went straight back down, so we’re hoping to do better.”

The Donegal leagues will commence this month and Lynch can’t wait to get going.

“We’ll be glad to get back playing football, you can’t beat playing games, that’s what everyone wants.”

Lynch acknowledges that staying afloat in the senior ranks won’t be easy, but that it’s important in the long-run to establish themselves among the bigger teams in the county.

“We’re going in with our eyes wide open, we’ll be favourites to go down and everyone will probably be looking at us thinking it’ll be a handy game for them.

“But for us, if we manage to avoid going straight back up we’ll be happy as it gives us an opportunity to maybe get a bit of a run at things at senior level.

“To be honest it depends on the luck of the draw as well. There’s four or five teams ahead of everybody and everyone else is at a fairly similar level. You wouldn’t say you couldn’t beat them, but you’re not gonna say you’re gonna win either.”

Cloughaleeny came undone in the provincial arena by eventual All-Ireland champions Steelstown last season. They almost nicked it at the death but Lynch is gracious enough to say that the best team won on the day.

“We lost by two points and it possibly flattered us a wee bit. In saying that we didn’t play as well as we’d have liked, we only had a week to get ready for that game after winning the Donegal final.

“I’m not sure that made any difference. Steelstown seemed to improve a lot after our game. We did hit the crossbar with the last play of the game, there was a high ball in and one of our boys got their first to it. But to be honest if we had won it would’ve been unfair on Steelstown.” 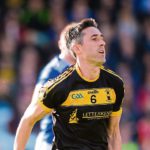