GAOTH DOBHAIR will be without their main scoring threat in Eamon Collum along with a host of other household names when they travel to Glenfin on Saturday evening.

Collum, who scored 2-3 in their win over Ardara last weekend, shipped off to Dubai for a new teaching job this week while a number of other players are currently sidelined through injury, as explained by manager Trevor Alcorn, who has been forced to give youth a chance.

“You have Eamon and Neil (McGee) still playing so you have that great experience but no (Kevin) Cassidy this year and we’ve had a very hard year with injuries. I’m not making excuses, but we have a lot of injuries.

“We have to go back to the well now this week, we’re going to be working on trying to find other boys to try and fill his boots. It’s hard because we relied on Eamon a lot this year, he’s always dangerous when he gets the ball but it’s time for other boys to step up.

“You need to score; we’re trying to bring that game back where there’s a bit of enjoyment in football for spectators. I think now the game has to change, you need spectators back and you need that exciting end-to-end game back because I think we’ve kind of lost our way of why we started playing football in the first place.

“Scoring is going to be vital especially against Glenfin. It might be a low scoring game because the field’s tight and they’ll be hard to break down. We found them very hard to break down in the league and were beaten 0-9 to 0-3. It’ll be a case of seeing how the young boys react.”

The 2018 Ulster champions picked up an important two points on the opening day considering the rest of the results, but Alcorn is under no illusions of the task they face on Saturday.

“When you see the other results going the way they did, even the likes of Glenties who you probably would have favoured to get off to a good start, they drew and St Michael’s drew and Cloughaneely as well a drawn game, it puts us in good stead now that we have the two points.

“But what you do this weekend is more important, if we could get another one under our belts then we’d be on the pigs back. Glenfin would have beat us already in Glenfin, they are a completely different team up there. They still have Frank (McGlynn) orchestrating everything and he’s playing very well, and they have a great spread of young forwards as well.

“I think they had six different scorers against Killybegs, I know they got beat but they still have a lot of men to watch. They have a great mix of experience and youth there. It’ll be a tough battle and a tight field, and it’ll suit them because they’re physical as well and we have a lot of injuries and a lot of young men in there, it’ll be no easy task.” 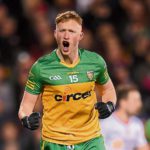 Sean MacCumhaills aiming to push on in the championship