Sunday is the fifth meeting of Derry and Donegal in an Ulster Senior final, with the honours even. Seamus Downey and Colm McFadden give their memories of taking home the Anglo Celt Cup.

AS the clock ticked towards the third minute of injury time in the 2011 Ulster final, the Anglo Celt Cup was on its way back to the hills.

The years of hip-hip hoorays were in the history books.

Anthony Thompson kicked a pass into the breadbasket of Michael Murphy. It was poetry in motion as Colm McFadden peeled across the front of the skipper before launching a monster point. Its conviction matched the accuracy from the wing and his clenched fist said it all.

“I looked over at him (Murphy) and he looked back at me…we knew it was in the bag,” McFadden said of his standout memory from a day they laid down a marker in Ulster.

“It was a great feeling…a relief that we were finally going to win a final. It was something that looked like was never going to happen and we were a mile away from it.”

It ended a 19-year wait for an Ulster title, looking on from the shadows of Tyrone and Armagh.

The appointment of Jim McGuinness was followed by a team meeting that changed their mindset. The morning brainstorming session unearthed reasons why a feature in The Irish News would list Donegal as the 19th ranked team in the country. The afternoon unearthed solutions to begin an elevation towards Croker on September’s third Sunday.

Block by block, they built themselves up. A sky-high fitness level. A defensive first plan that morphed into a counter-attacking system that shot them to the next level the following year.

McGuinness made a statement with Michael Murphy as skipper. A new beginning, straight out of the u-21 team he managed to within the width of a crossbar of winning the All-Ireland.

McFadden taught Murphy in his final year in St Eunan’s College Letterkenny, where the Glenswilly man was the focal point of a group of players who swapped MacLarnon level football for the MacRory Cup.

While operating on one leg, Murphy sank Abbey CBS and booked a quarter-final spot for St Eunan’s in their first season.

“He was a monster in at full forward, he was some operator and that was him not fully fit,” McFadden recalls.

“His ability to win ball and score goals, he might’ve got two goals that day with his sheer strength and he was a great presence inside.”

While many on the outside of the camp pondered Murphy being too young to be named as the county’s senior captain, the players had a different outlook.

McFadden describes Murphy as “quiet-natured”, but came into his own inside the team cocoon.

“He leads by example, which would be his biggest strength all through his career. It is more evident now, with the young boys in the current squad,” McFadden adds.

Of the likely listed six forwards for Sunday’s showdown, Jamie Brennan, Michael Langan and Ciaran Thompson were in their mid-teens when a 23 year-old Murphy lifted Sam in 2012. Shane O’Donnell was 11, with a 19 year-old Patrick McBrearty part of their winning side.

“To be watching him then and now to be playing alongside him, it must be good for those fellas with him setting the standards,” McFadden said of Donegal’s current team.

He lifts the lid on what Murphy’s leadership looks like. It’s always “full steam” ahead. Corners are never cut. A competitive edge rolls into every obstacle. His lifestyle lends itself to being in pristine condition.

“We wouldn’t have been surprised, as players, at all,” McFadden said of McGuinness’ “obvious” choice of on-field leader.

By the time Donegal arrived on Ulster final day, they just had to win. Their obsession with beating Tyrone gave them a season-long focus of where they needed to get to.

They had toppled All-Ireland champions Tyrone in 2004, but were on the wrong end of a 13-point Croke Park humbling on Ulster final day.

”Tyrone were the benchmark in Ulster all through that decade,” McFadden points out. “It was something we built on all year and there was no point in beating Tyrone if we couldn’t beat Derry in the final.

“To win that day was, it was massive to prove to ourselves that the Tyrone game wasn’t just a once off and that we were able to go all the way to win Ulster.”

McFadden has “vague” memories of the 1992 and 1993 Ulster finals when the counties again. It was Derry once again in 1998, just as he was on the cusp of breaking into the county minor squad.

“I was watching those boys and to play Derry in the first one we won added a bit more excitement,” he said.

“Watching Derry beat Monaghan the last day, it is building up to a nice Ulster final again. The memories from my own childhood, playing Derry in an Ulster final was always a big occasion.”

Derry have not tasted success since the moment Geoffrey McGonagle put the ball on the plate for Joe Brolly to hammer to the net at the heel of the 1998 final.

“It was a low-scoring affair and that’s the moment that stood out and you don’t see many more highlights of that game,” said Seamus Downey, the only other player to score a goal in an Ulster senior final against Donegal. 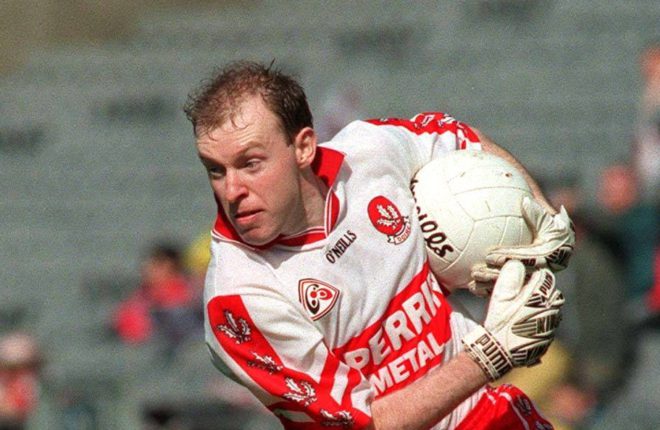 He refers also to Brolly’s kisses of celebration, only outshone by goalkeeper Eoin McCloskey clambering up on the crossbar in a moment of elation.

It was “revenge” for losing to Cavan 12 months earlier, when Raymond Cunningham’s disputed point stand in a game decided by the narrowest of margins.

“We feel we left it behind us,” insists Downey. “They played in an All-Ireland semi-final against Kerry and I think we could’ve done something.”

Derry lost to Galway in the 1998 All-Ireland semi-final at the tail end of Downey’s career, but there is a very definite sense of disbelief at the Oakleafers not tasting success since.

With three sons on the current Derry panel, Downey is well-placed to run his eye over Derry’s renaissance in recent years.

The 1998 winning side was a “new team” with players moving up from the 1997 All-Ireland u-21 winning team. Sean Marty Lockhart’s performance on Tony Boyle helped him secure an All-Star in just his third season.

“They didn’t feel out of place,” Downey said. “Those boys came in to join a team that had All-Ireland winners on it. Lockhart wouldn’t have looked out of place on any team in Ireland. It’s the same as the current Derry team with boys coming off the back of those recent minor teams.

“While you don’t get everybody out of minors and u-20s, if you are pushing at the top end it brings seven or eight lads through,” added Downey, now at the forefront of Lavey’s resurgence.

“It makes some difference to your panel, never mind your team. It helps your training in that you are playing with good players.”

There were lean years before the 1993 pinnacle. League titles and Ulster finals were stepping stones. Now, five years after a brief escapade in Division Four, Derry are clawing at the ceiling again.

“It takes time for that to happen for people to buy into it,” Downey insists. “This Derry team has similarities to the team back then. There is a real close-knit bond between the players and the manager and people are prepared to play for each other and support it.”

The former Derry forward credits the County Board for being part of the “jigsaw” that is beginning to take shape.

“I think Derry have reached a sound footing now and for the next few years,” he added, while terming the current team as a “band of brothers” – always backing each other up.

“That comes from training,” Downey insists. “The Derry lads under Gallagher have trained really hard and if you train really hard you get a collective bond from the training, more so that socializing or going out together. You can see that manifest itself in games.”

As the game ticks towards a crescendo on Sunday, McFadden and Downey will be among a thronged Clones amphitheatre.

Who makes it three wins from five meetings of the counties in finals? The experience of Donegal or Derry’s youthful march.? Nobody will be leaving early.