Derry have three players who have been highlighted by Electric Ireland’s GAA Minor Star awards so far. The trio are in the running to become part of the Minor football team of the year.

The first nominee for the Derry team came via public vote on Electric Ireland’s Facebook page and it was a fitting reward for a scintillating performance from Derry’s Ben McCarron.

Ben had started the year on the bench but after making a big impact against Tyrone in an impressive win for the Oak Leafers, McCarron was rewarded with a start the following round against Antrim in the Ulster Semi-Final. That game went as many pundits had expected with a comfortable win for the Derry team and Ben secured his own nomination for the Electric Ireland GAA Minor Star Awards when the public chose him as their Player of the Week after his three-point haul.

The second nominee for Derry is Lorcan McWilliams who scored  three points in Derry’s opener against Tyrone – a strong showing by any account.  It was not however until his dominating display against Dublin in the Electric Ireland Minor Semi-Final that saw him awarded with the Man of the Match award and a nomination for the Electric Ireland GAA Minor Star Awards.

Derry’s final nominee was never really in doubt. Having suffered bitter disappointment following last year’s Ulster Final defeat Padraig McGrogan has been in commanding form this year and has now captained his side to Ulster success and an All-Ireland showdown with the Kingdom. The Newbridge man led by example in his side’s dismantling of Cavan in the Ulster Final and was rewarded the Electric Ireland Man of the Match award for his efforts.

The Electric Ireland GAA Minor Star Awards were launched by Oisin McConville and Dónal Óg Cusack earlier this year to highlight the skill and commitment given by both footballers and hurlers playing at Minor level.

The team will be selected by a panel of GAA greats from nominees that included the Electric Ireland Man of the Match and Player of the Week winners throughout the season. The Minor football “Team of the Year” will be announced on the 25th September with the Electric Ireland GAA Minor Star Awards taking place on October 7th in Croke Park. 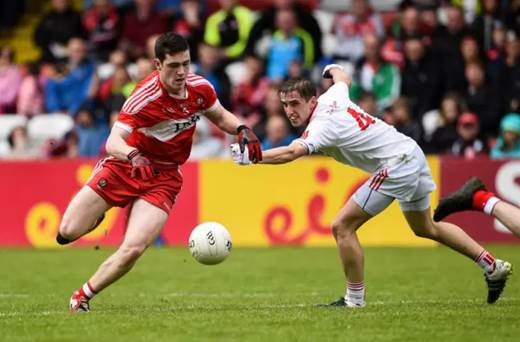 McCarron on brink of realising his Derry dream