We asked former Derry star Paddy Bradley about some of the players he came up against during his career.

Which opposition ground did you like playing on and why?
I always liked playing on Bellaghy, even though I did my first cruciate there. It had a good surface, always had a good atmosphere and had plenty of good games there. At County level, going to Casement Park or Clones was always brilliant. Two brilliant places to play football and I put in some good performances on both pitches.

Which opposition ground did you dislike going to and why?
I never liked going to Swatragh. It always felt a big, vast pitch that was open to the elements. It always seemed so long and there was no ballstop behind the top goals, only loads of space and they were always difficult to kick into. Loup’s old pitch wasn’t for the feint-hearted either.

What team did you enjoyed the most success against?
~At club level, thankfully I lost very, very few games to Kilrea, our rivals from across the road. I’ve never lost a championship game to Bellaghy, who hold the records for most championships (21) in Derry. We had a decent record against a very talented Ballinderry side who weren’t long after winning an All-Ireland.

For the county, I wouldn’t say there’s a side we were consistently getting the better off as consistency was our problem. We had a good league record against Tyrone, but not so good a record when it mattered in championship.

Which team did you enjoyed least success against?
For the club, Banagher were a bit of a bogey team for Glenullin down the years. At county level, again, there wasn’t any team seemed to have the upper hand on us all the time. On our day we were capable of beating anyone but doing it consistently was the issue.

Which opposition player did you enjoy marking? Which opposition player did you dislike marking?
I will answer these two together, as I didn’t focus too much on any individual when I was going out to play. I always believed that if I was on form I was well able to perform against anyone. The two players I would say I had the most difficulty marking were Damian Healy (Westmeath) and Donegal’s Karl Lacey.

Which player would you have transferred in from a team you have come up against?
Benny Coulter. Myself and Benny have a regular spat on Twitter. Had he been training with me week in, week out, then he’d be in no doubt who was number one. In all seriousness though, Benny was some player. He could light up a stadium, created so many chances for those around him and could get important scores and would have been some man to play with on a regular basis. 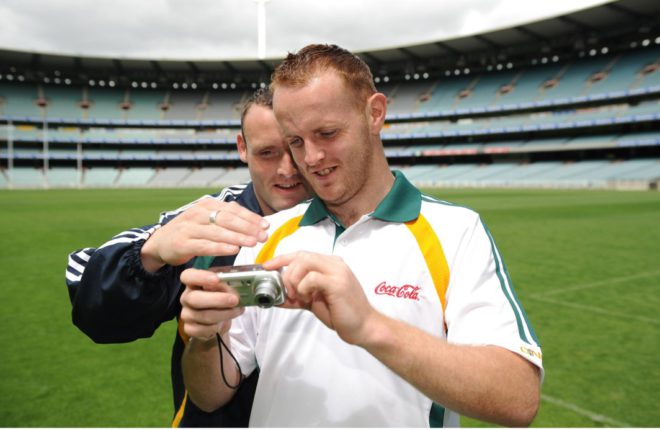 Which team, apart from your own, did you like to see do well and why?
For the club, I always check in on Dunloy and Newbridge as I used to manage both these and I will also keep an eye on Loup moving forward. I still be in regular contact with the boys in Boston and have an interest in what’s going on out there with Donegal. I still follow St Patrick’s scores and if I can take in a MacRory game now and again. I also look for UUJ scores.

What was the most frustrating defeat you have experienced?
It would be our 2009 semi-final against Dungiven. We had beaten Ballinderry in the quarter-final. We were six or seven up at half time in the semi and cruising when it all fell apart.

Loup, who we had beaten easily in the first round, went on to win that championship. If I had a time machine to go back I’d go back to half time in that changing room.

For Derry, it would be the 2001 semi -inal against Galway. Again, we had the game in the palm of our hands. I was probably too young to realise how close we were to winning the All-Ireland and its significance. I guess I believed that I’d end up playing in many more games like that, but it didn’t work out like that.

What was the most satisfying victory you have experienced?
That’s easy, the 2007 championship final win over Bellaghy. It was a lifetime’s ambition fulfilled and years of hard work rewarded.

Which team, apart from your own, do you think could be set for big things in the coming years?
At club level, Lavey have promising players coming through and should be competing for titles very soon. Glen look like they will be there for a few years as the age profile of their team is very good and they have a system they now know and understand and will take some breaking down.

In fairness to the clubs in Derry, there is serious work going on and Derry hopefully will continue to make steady progress and we will see the seniors up competing in Division One and for Ulster titles again.

I hate to say it, but the conveyor belt of talent in Tyrone doesn’t seem to be slacking either and this year’s All Ireland is going to give them serious belief that they can dominate for a few years.