IT is a team game they say, but all the while we are so fixated on individuals. On a pitch stand 30 men. They battle, they scrap, they fight for every little advantage, every ball. Most of that 30 will cancel each other out. The rest carry the tag of a hero for a day or two.

What is their reward? Back to square one. Prove yourself again, do better. If you are lucky enough to get a second chance that is.

The quality of inter-county football is such that a player who ran the show one week will be nullified the next. No one can consistently reach inhumane levels. This summer had been touted as the one where David Clifford wins Kerry the All-Ireland or the one where he is stopped.

On an island of footballers, it all boiled down to one. Or so we were told in the post-League, pre-Championship nothingness where a few matchless weekends drove us all deluded. The choice of a Coronation Street omnibus or spending some quality time with the family would do that to you. Hibernation wouldn’t be off the cards.

Then the Championship did roll round. The fear of a Kerry hiding had the noisy Rebels rather subdued before throw in. After the full-time whistle, an absence of magic from a man from Fossa reminded us that one man will never win an An-Ireland. They can lead, they can inspire, they can galvanise, but all those words relate to their impact on others.

Fast forward a few weeks and Clifford is not so much the buzz word that he deservedly was this spring. The media, especially in this condensed season, tend to move on fast. And this coming Sunday could see Rory Gallagher take up the mantle from Clifford as the man at the centre of the GAA universe.

Character, charisma, passion. The game has cried out for an unfiltered personality that leaves no questions unanswered. A talking point. A fella that empties every drop out of the tank and leaves no stone unturned. A fella that wants to win at all costs. A fella that needs to win.

And that last point creates an ethical footballing issue. It creates hatred amongst all the love. Mark McHugh, speaking on The GAA Social podcast, recalled Gallagher’s time over Kilcar. After falling three points down against a stiff breeze, the manager instructed his team to hold possession. They did so, all the way until half-time where they went in scoreless.

When questioned on his decision Gallagher said the only thing he would have changed would have been to do it from minute one. Win at all costs. 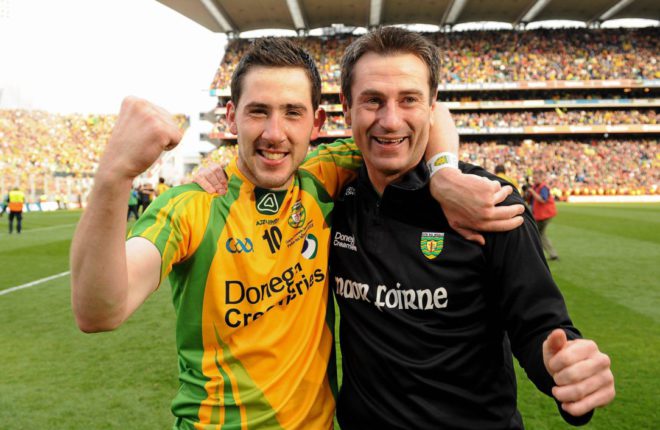 Here you have a focal point that hides nothing but hides everything. So predictable, yet covered in a layer of mystery as thick as the fog that hugs the peaks of the Sperrin mountains in the Derry winter. We know that Rory Gallagher is borderline psychotic, but the joy and the fear of psychosis is we never know what he will do next.

Sunday’s meeting with Donegal sees him reacquainted with Declan Bonner. People who know Rory Gallagher often outline his remarkable ability to remember. Last year’s Championship exit at the hands of Tír Chonaill is not something which would have slipped the Fermanagh native’s mind in the intervening 12 months.

The sleepless nights would have been slowly remedied in an impressive but not outstanding League campaign. A win over Tyrone almost single-handedly rendered the year a success, but the manner of that victory would have put most counties on this island on cloud nine. That doesn’t cut it in these parts. In the Ulster Championship, you cannot take your eye off the ball.

Monaghan lay next in store in Armagh. In the Farney County the hope was that this Derry team could not rally themselves to the same degree again. The hope was that the Tyrone game had been looked at in isolation from months back and that there were issues in the Tyrone camp.

That was the hope. The expectation nationwide was that Monaghan would overcome what was undoubtedly a formidable obstacle.

The term “troops” is an overused one in the world of sport, but when Gallagher stood with his team pre-match in the Athletic Grounds, that is exactly what they looked like. They hung onto his every word, the last of which only came seconds before Amhrán na bhFiann commenced. All the while Monaghan stood and waited for the anthem as most teams do.

When the ball was thrown in, Derry still had their lieutenant’s orders ringing in their ears. Ears that were the same shade of red as their uniform for war. Again, Monaghan stood and waited, but this time the ball was in play. Gareth McKinless fired the first of three fatal shots. Benny Heron followed up and finished the contest. Derry, the underdog, captured the flag in Armagh.

“I got my cloak and dagger in a bar room brawl, see the local loves a fighter, loves a winner to fall”.

Two from two and so the previous victory in Omagh was not out of the blue, for lightning doesn’t strike twice. Donegal now lie as favourites this coming Sunday, just as Monaghan and Tyrone did before them. But many people’s eyes will be drawn to one Rory Gallagher, an individual who has climbed above the rest this summer. An energetic youth, but also such experience. A font of knowledge and a baptism of fire. 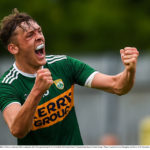 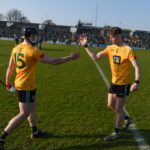