DERRY’S objective from the start of the season was to get their hands on the Anglo Celt Cup insists Benny Heron.

After hammering home two goals to sink Monaghan on Sunday, the Ballinascreen man dismissed any feeling of satisfaction of twice finding the net, stressing the “only thing” was to reach the Ulster final against Donegal later this month.

“Our objective from the start of the year was to win the Ulster Championship, we make no bones about it,” said Heron, who made his senior debut against Laois in 2013. “That’s where we want to be…winning Ulster titles with the likes of Tyrone and Donegal.”

He feels his side have a “massive chance” now but accepts Declan Bonner’s side will be a “formidable” obstacle in the way of a first Ulster title since 1998.

Heron, who has scored four goals this season, admits to feeling the pain of seeing his palmed effort coming back off the crossbar at a crucial conjuncture when Derry had Donegal on the ropes in last year’s championship.

Putting impressive back to back performances has gone a long way helping spread the Derry scoring load across the team.

Where does the belief of winning Ulster come from? 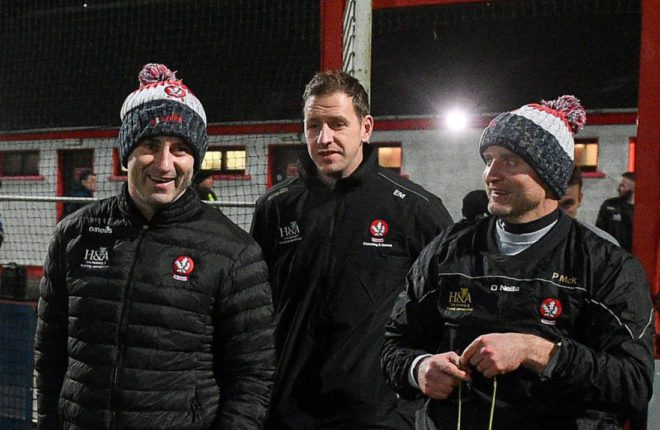 “It is a lot of things,” Heron replied, citing belief instilled by the management team, the work Derry put in, the squad’s ambition and having everyone buying in.

“That all snowballs and it gathers a bit of momentum…then you really start to believe,” he added.

“Talk is cheap and you can tell yourself that you want to win an Ulster Championship or that you are in with a chance, but, deep down, everybody really does believe this year. It is down to hard work, it really is and that’s the bottom line.”

Coming into Sunday’s game, all the talk and questions asked of Derry surrounded the level of performance in their 11-point win over Tyrone and their ability to back it up.

Heron admits to being a “bit weary” of some chatter suggesting their win over the All-Ireland champions was Derry’s Ulster final and how the squad were happy with their lot.

“We weren’t,” Heron insisted. “It was one step on the ladder, that’s all it was. Obviously it was great to beat Tyrone in such an emphatic manner, it was a good performance but we weren’t going to get carried away.

“It was just a first round win and it was the same today (against Monaghan), it was only a semi-final and it puts us in a place to have an opportunity of an Ulster Championship. It is going to be a massive, massive game against Donegal.”

It was a packed house on Sunday and Heron thinks back to the years when support wasn’t as plentiful. He is one of six players to feature against Monaghan from the team that lost to Sligo on the final day of the 2018 season that saw Derry drop into Division Four.

“The support today was brilliant and to see everybody here on the pitch after, to see how people are from Derry, it’s great,” he said.

“That’s what we have been trying to achieve, to put a big of pride back in the jersey. When we went down to Division Four, it wasn’t a good day for Derry football. We regrouped; pushed on and we need to keep pushing.”

READ MORE – A familiar face back in Crossmaglen. Click here… 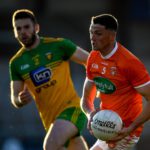 All to play for on calculator Sunday