THE shoots of hope from Derry’s 2020 Ulster Championship defeat to Armagh gave Rory Gallagher the encouragement to drive the county to the new levels that delivered a first Ulster title in 24 years.

From the “early training sessions” in the 2020 season, the Derry boss became aware of the swathes of quality, yet there was “dysfunctionality” in the camp.

“We weren’t doing things right,” he said, before they got the “wheels in motion” in September ahead of their Celtic Park clash with Kieran McGeeney’s men.

“We were far from well prepared going into Armagh, but we showed enough that day to encourage me to go back at it hard, to show stronger leadership and a very clear direction of what direction we needed to go,” Gallagher recalls.

A refreshed backroom team included Peter Hughes coming in to oversee the conditioning programme. The panel was changed and having a lot of “very good characters” on board helped steer the ship in the right direction.

The 2021 season brought the narrowest of defeats at the hands of Donegal and Gallagher terms their May win over All-Ireland Champions Tyrone as “massive.”

When the dust settled on their 2020 defeat to Armagh, Gallagher told the players it was the first time in 10 years a Championship defeat didn’t hurt him.

In comparison to the level of work put by Armagh in the years previous, Derry didn’t deserve it. Armagh’s collective effort was considerably greater.

The Donegal defeat was an “unbelievable difficult day” for both himself and the management to accept.

“Chrissy (McKaigue) said it was a success in that we could compete. I felt, as a group, we were devastated losing that game,” Gallagher said.

“There was no back door, nothing, and we still lost in a game we could’ve won which I didn’t think was a great reflection on us.”

The contrast of both Championship defeats elevated May’s meeting with All-Ireland Champions Tyrone to vital category, to get a taste of winning.

“They (Derry) hadn’t won enough Championship matches, you need to start that journey and they still haven’t won enough,” he said.

Gallagher recites a list of names amounting to almost half the starting team and the “significant role” and pressure he places on himself to fine tune them to the peak of their powers. It’s about guidance and structures to bring Derry down the winning path.

It was about mentality, but not just on that afternoon in Healy Park. That was the icing on the cake. For Gallagher, mentality was about the every day routine amidst the “ups and downs” along the way.

He points to the three months before taking Donegal down the final stretch in Ballybofey at the end of  a League season that saw them cap off promotion from Division Three with silverware in Croke Park.

“That mentality is day after day, it is not just about work. Everybody can give time and effort, but it’s the quality of the work and the quality of their ability to learn to be part of a team,” Gallagher said.

Derry’s season has taken the county on an Ulster rollercoaster to the title after a tactical arm-wrestle against Donegal, with Brendan Rogers and Conor Glass galloping up and down St Tiernach’s Park when Donegal limbs were labouring.

There was a week of celebration followed by three more of preparation on the training field, with the Derry fans’ excitement going into overdrive.

People who rarely talked about county football are now engrossed. There is the scramble of tickets and the release of a new song.

While the Derry manager knows the need for the players inside the camp to stay ice-cool, he insists the hype in the county should go “through the roof.”

After a sustained time without any glimmer of success, families, fans and the entire county should “proudly” tap into the excitement.

“Live each day as it comes with the short-term goal now is to have a brilliant day out on Saturday week against Galway,” Gallagher insists.

“It won’t impact the players at all; good players can deal with that. Players that are maybe star struck or maybe taken over by the occasion probably aren’t worth having anyway”.

The Derry boss said it’s “ironic” their place on All-Ireland Sunday hinges on a rematch with Galway. He is proud of how his team “recovered” from the 4-11 to 0-12 League defeat, adding that it’s the hallmark of a successful team.

He also points to how Galway bounced back from being relegated in the dying embers of their Monaghan clash in Clones last season and secured promotion back to the top-flight for 2023 after just six games.

“Pádraic (Joyce) had them flying and then Covid hit and they went the other way, they didn’t get the results that wanted,” Gallagher said. 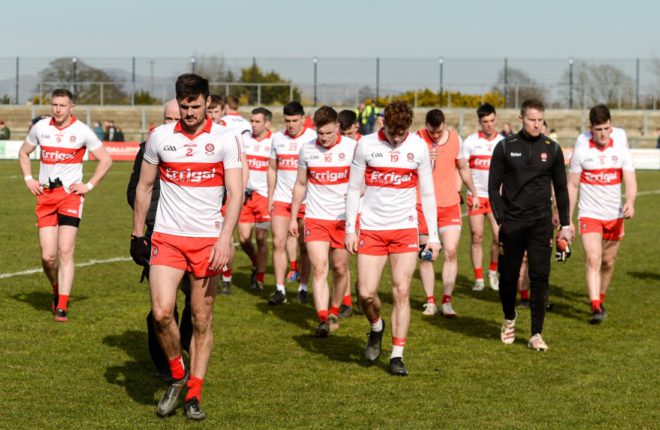 The Derry horror show of conceding three first half goals wasn’t a game he dwelt on too much in terms of post-game analysis. It’s didn’t form the basis for a major pre-Championship overhaul, but it helped affirm the “clear” tweaks required for progress.

“We had issues coming out with the ball from the back, but I wouldn’t be proud of how I prepared the team that week,” he said of the “cruel” and “quick” falling off the wagon in the first half of their Owenbeg clash with Galway.

“I wouldn’t be proud of how ourselves coached the team going into that week to have the boys mentally right so it is very important we set the right leadership and right tone for everybody. The players manage the game on the pitch, but we have to take responsibility for the way we went about it that week.”

Gallagher was in Croke Park in the flesh to run his eye over Galway’s win over Armagh. In what he described as a “great occasion” he was there “very analytically” and stated how Galway were “a mile” the better team after 10 minutes.

“I thought they were totally in control at six points up,” he said. “There were desperate measures that got Armagh the two goals and then Rian O’Neill kicked a wonder free, but I thought Galway showed an awful lot of quality for 55 or 60 minutes of that game.”

He rates Saturday’s semi-final as a “ferocious battle” with two “new kids” on the block, aiming to experience the biggest day in the Gaelic football calendar. But, it’s the biggest occasions that gives him the buzz.

“Tyrone was a big occasion and it grows again and it’s about backing it up against Monaghan, then the final and recovering to play Clare to get up for it again,” he concluded.

It is a massive occasion, but it’s an occasion you just have to be ready for it. The players’ temperament deals with that and it’s nothing I am in any bit worried about.” 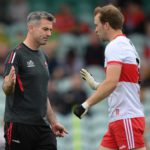 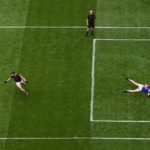