WHEN the “game of inches” was rolled out as a sporting cliché, it fitted Benny Heron and Derry like a glove in Ballybofey last year.
The Oakleafers outplayed them on Championship Sunday and Declan Bonner’s side were frantically treading water.
Heron palmed Padraig Cassidy’s fisted cross off the underside of the bar, but it didn’t cross the line. A goal would’ve put Donegal’s lights out and was talked about in the days that followed.
The body language of the Derry players after the game spoke volumes. Utter devastation wouldn’t do it justice. They poured everything into the game and were left with a summer of nothing.
I’ll never forget the face on Chrissy McKaigue, a matter of metres away, as Paddy McBrearty’s winner dropped between the town end posts. The 38 minutes staring back at me from my watch told me Derry’s race was run.
Another year and another Division One team were in Derry’s radar from this year’s Championship draw. Fermanagh were in the mix too, but it was hard to make a case for anything other than a clash with the All-Ireland champions.
Derry’s league was a mixed bag. Winning four games they’d be expected to win was followed by a gutsy comeback in Roscommon.
Then there was the Shane McGuigan one-match ban farce and the hammering by Galway.
The Meath game was mediocre and meaningless.
The weekend before Sunday’s Omagh clash, Derry were camped away in a Limavady hotel, with players in each other’s pockets.
The fallout of Ciaran McFaul and Jack Doherty leaving the panel was over and out.
On the Monday after their training weekend, the unfounded rumour of Gareth McKinless’ defection from the squad was gathering legs. 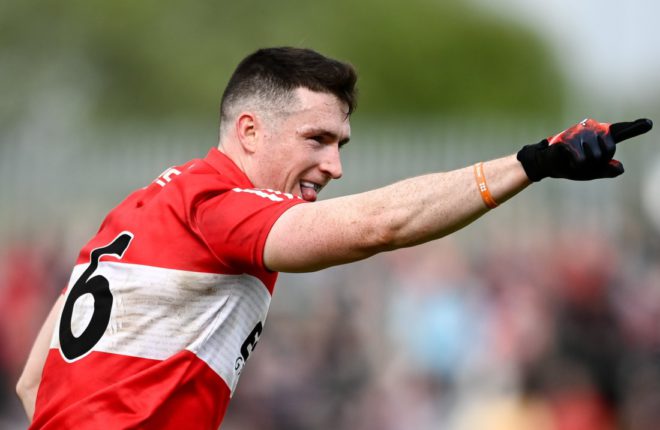 Only those in the inner sanctum of the panel would know the breakdown of their weekend away, but the first half spilled the beans on the bones of it.
Total preparation. Both tactically and reports of a grueling training regime since the end of the league.
McKinless was detailed at midfield for Emmett Bradley. Chrissy McKaigue was to go on McCurry with Rogers at home on the square on McShane.
I’ve lost count of the number of times someone has told me Paul Cassidy doesn’t warrant a place on the starting team. But Gallagher’s opinion is the only one that matters. The fact he put Cassidy on Conor Meyler was a major vote of confidence.
Captain of Bellaghy’s Ulster minor winning team, he didn’t wear the red and white until u-21 level.
As the game developed, he began to get on as much ball as Conor Meyler.
For me, his winning of the penalty is a by-product of preparation in the weeks after the league. Against Roscommon Cassidy kicked a shot at goalkeeper Colm Lavin from an impossibly tight angle.
A week later he had a shot tipped over against Galway with the angle not his friend. On Sunday, when he peeled behind Peter Harte and found himself in the same position, Cassidy went for the jugular, sidestepping inside Niall Morgan to win the penalty. He had learned his lesson.
Niall Loughlin took a hold of the ball. Shane McGuigan had missed a penalty against Meath. Did the ball in Loughlin’s hands make Morgan second guess the kicker? Maybe.
But up stepped McGuigan to slot into the corner of the net. Gallagher’s phone call to him on the Monday after Navan telling him he’d be taking the next penalty was a statement of faith.
The penalty came after Brian Kennedy’s red card for a kick at Gareth McKinless. For me, McKinless had set the tone. He was simply awesome, back to his irresistible 2021 form. 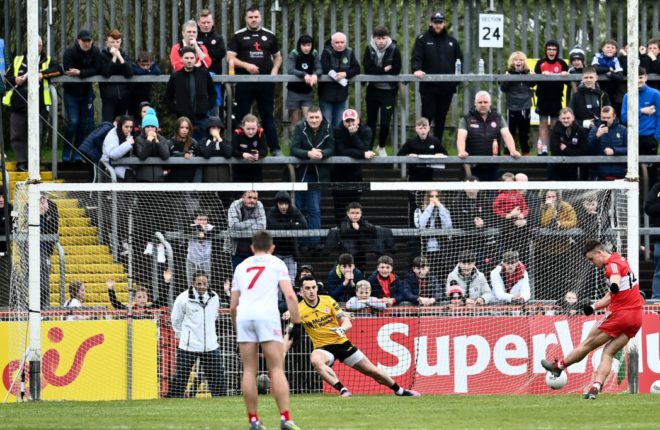 COOL AS YOU LIKE….Shane McGuigan dispatches his penalty

The fall guy, wrongly in my opinion, from the Galway first half debacle was Odhran Lynch. On Sunday, he had a better range of kick-out options. And he used them.
Add in Glass being an option over the top. Conor and Ethan Doherty were relentless in their attacking prowess, with Brendan Rogers lending a hand in the knowledge that McKaigue was doing what he did to Rian O’Neill and Paddy McBrearty – carrying out the tedious task of being on Darren McCurry’s shoulder.
Derry got so much right. Niall Loughlin was unerring and with much of the talk of McGuigan’s obvious importance, it was a day when others stepped up to the plate.
None more so than Benny Heron, he was excellent. I’d say that palmed effort off the Ballybofey crossbar has crept into his thoughts many times in the last year. The way he (and Loughlin) threw themselves into tackles in the opening moments opened the lid on a desire that Derry carried all the way through.
It was a win well within Derry’s reach, but the margin will have raised a few eyebrows. It will give Monaghan enough leverage to crank up their preparations.
For Tyrone, they face a few weeks of picking through the rubble ahead of the qualifiers. It’s a route that has served them well over the years.
Hunger is the best sauce. Just ask Derry.