RORY Gallagher insists he will be picking from close to a full squad ahead of Derry’s first All-Ireland semi-final since their 2004 defeat to Kerry.

Padraig Cassidy and Oisin McWilliams weren’t risked against Clare and remain in full training ahead of Derry’s Croke Park showdown with Galway.

Cassidy, who started all but three of Derry’s 16 games of Gallagher’s first two seasons as manager, has only played a total of 120 minutes this season.

His only start was in Navan as Derry overcame Meath, but he was replaced by Shea Downey after 30 minutes before cameo Championship appearances against Tyrone and Monaghan.

“There are no fresh injures,” Gallagher told the assembled press at Friday’s media afternoon in Owenbeg.

“Padraig Cassidy was the one player we’d have been hoping would be fitter than he has been,” added the Derry boss who said Cassidy wasn’t risked with the “nature” of the Clare game.

“He did a full part in training the other night again, so there’s an advantage there.”

Oisin McWilliams, who sustained a broken jaw in the League defeat to Galway, wasn’t risked in the quarter final either.

“He came on in the Ulster final, we were stretched for numbers at that stage,” Gallagher said. “He had a niggle in his squad so we left him and he is fully training as well.” 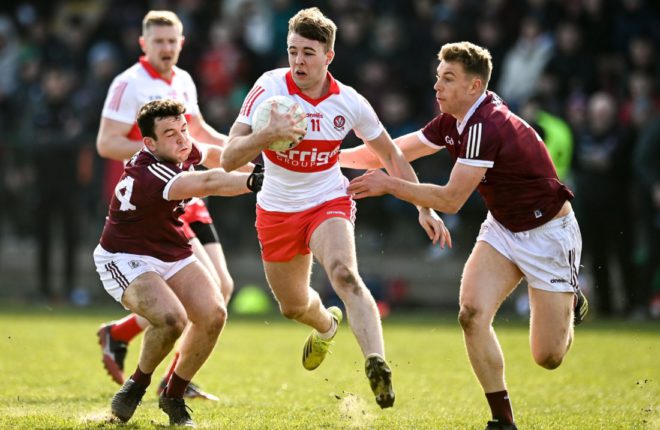 Donncha Gilmore’s shoulder injury, sustained on u-20 duty against Cavan is the only player on the injured list, with Niall Loughlin having 53 minutes under his belt from the win over Clare after a troublesome back injury.

Gallagher said the management are taking a “cautious” approach with young trio of Matthew, Enda and Calum Downey who “all carried knocks” from earlier in the season.

“Matthew is close to a return to full training; Enda and Calum have done bits of it. They are very young and haven’t had as much game time, as well as Eoin McEvoy,” Gallagher added.

Galway manager Pádraic Joyce will be in the position to name a unchanged team after skipper Sean Kelly had his red card rescinded from their win over Armagh.

The Tribesmen will have to plan without Cathal Sweeney who was handed a one-match ban following an investigation into the unsavoury scenes at the end of normal time.

Both counties were handed fines following the investigations.