THIS week, former Derry star Eamonn Burns looks back at some of the memorable moments from his club, county and school career.

Which club game, that you played in, will you never forget and why?
The 1990 Derry Senior Championship semi-final. Ballinascreen v Newbridge, I had just played a minor semi-final earlier that same week. Newbridge were reigning champions. We lost two key players to broken legs in the first half (Benny McPeake and Conor Murray), but this inspired us to a six-point victory, even having the luxury of a missed penalty late on by me. We reached our first county final since 1973, but unfortunately couldn’t overcome Lavey.

Which club game, that you watched, will you never forget and why?
The Tir Conaill Gaels v Lavey match in Ballinascreen in December 1990 was a pulsating game with James McCartan, Mattie McGleenan, Barry Cunningham, Timmy Connolly all putting it up to Lavey but a 40-plus Anthony McGurk popped up in extra-time to palm in the winning goal off the post. They went on to win the All-Ireland having beaten us in the county final.

Which county game, that you played in, will you never forget and why?
Obviously the All-Ireland final in 1993 was special. I remember getting the call to go on, and warming up on the Cusack Stand side with spectators having to sit inside the wire, rain drizzling down. The game was a draw. I thought to myself, ‘This is the moment’. I won a free (which was converted) and set up a chance for Joe Brolly (which was missed). That was my only two touches, but we won and being shouldered over to get the Sam Maguire and the aftermath was so memorable.

Which county game, that you watched, will you never forget and why?
I attended every All-Ireland final with my father Michael since I was knee high (1977 the first I think). Kerry became dominant and I was a huge fan, so as a 10 year old, I was fervently hoping for the five-in-a-row until Seamus Derby’s last gasp winner for Offaly in 1982, my heart sank.

What was the funniest thing you ever saw in a game?
Ballinascreen manager Frank Kelly had forgotten his pen and notepad so instead he scrawled the starting 15 onto the wall in the changing room with a sharp nail and read it out to us from that. Needless to say, his team talks were always full of hilarious one-liners, most of which are unprintable!

What was the strangest thing you ever saw in a game?
I attended the All-Ireland semi-final between Donegal and Dublin in 2011 with my father and neither of us could believe what we were watching at the time. There were 14 men inside the halfway line, kick-outs being chipped out to free defenders…and the final score was Dublin 0-8 Donegal 0-6. It was strange; it was horrible; it was ingenious; little did we realise that system would become the template for so many teams over the next decade!

What was the most memorable performance from a player in a game that you watched?
Dermot McNicholl had some serious individual performances in his youth for St Patrick’s, Derry and Ireland, but one that left the most impression on me was the county final of 1985 up in Ballinascreen. They tried to take lumps out of him that day but he kept bouncing back for more and powered on to lead Glenullin to their first ever county title, him only 19.

What was the most memorable performance from a player in a game that you played?
Possibly James McCartan scoring 3-1 for St Colman’s, Newry against us in the MacRory Final 1989. He was unmarkable, But we still beat them!

What did you love about the games you played in?
I loved the anticipation of a big game; the tension; the rivalry; the camaraderie formed. Obviously I got a big thrill from having a good game or winning a match or championship which made all the training worthwhile, walking home from Dean McGlinchey Park on a high.

What did you hate about the games you played in?
I hated the fact that when I had one mediocre game, I got the chop and it was so difficult getting back into the team. I hated the fact that the games were straight knock-out in my day (the 1990s) when Derry were very strong. Had we had Qualifiers, I feel, like Tyrone in the noughties, we would have more than one All-Ireland to our name. 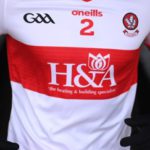 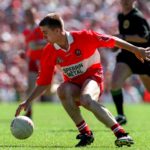 Air horns, summer in Clones and the Banana Gang – Joe Cassidy looks back at his career