DERRY tapped into every possible avenue of positivity in the search of ending a 24-year Ulster Championship famine reveals selector Ciaran Meenagh.

The tunnel under the Gerry Arthurs stand is thronged with players, officials and media. There is scarcely room to breathe.

In the midst of euphoria, Meenagh wears an expression of modest contentment.

Words of congratulations are taken and accepted in a quiet manner. He offers “incredible” when asked to put Derry’s momentous day into context.

Loughmacrory man Meenagh has taught in St Colm’s High School in Draperstown for the best part of two decades on a staff roster that includes a reinvigorated Benny Heron.

“It’s after the game, when you see what it means to everybody,” Meenagh said, commenting on the joy on faces of pupils and parents alike from the school community.

Despite praised heaped in his direction by Rory Gallagher, later, at Derry’s homecoming in Maghera, Meenagh modestly insists he is a “small cog” in Derry’s wheel. 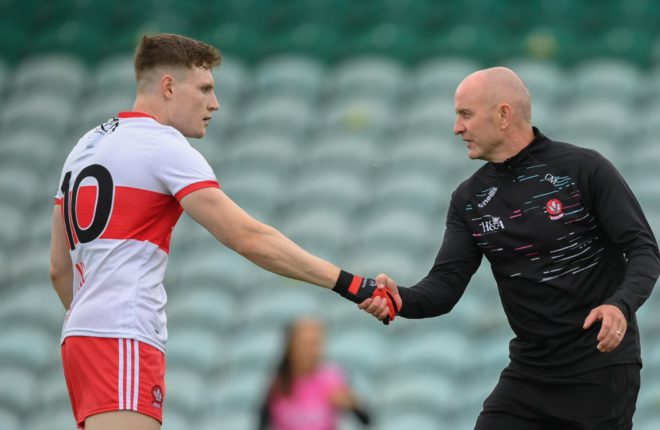 It’s about the players who file past his shoulder and down the narrow dressing room tunnel.

“They have put in a lot of work,” he stresses. “You sometimes get what you deserve in life, but those lads got a taste of it today. For Derry, there are good times ahead for them but that will accelerate the process now.”

After wins over Tyrone and Monaghan, Sunday’s showdown with Donegal was billed as a tactical battle. And it didn’t disappoint.

“It was an emotional rollercoaster,” was Meenagh’s reply when asked how difficult it was to focus on a game of inches.

“You are so powerless watching it on the sideline. When you are on the line in league games and games or with not as big a crowd, you can give instructions on.”

In the absence of the ‘Maor Foirne’ to help get instructions on board, it was impossible to get messages to the players in the Clones cauldron.

“It was purely down to the preparation coming into the game and today it was down to the players taking responsibility on the field.

“I found it okay on the line because I was very calm and confident coming into the game that we were going to win the game provided we played to our potential.”

A goal from Odhran McFadden Ferry wiped out Derry’s one-goal interval lead and when Ryan McHugh’s 42nd minute shot dropped over the bar the Oakleafers found themselves behind for the first time in the Championship with Patrick McBrearty’s free doubling their lead.

“You’d expect the wheels to come off if you hadn’t that inner belief,” Meenagh said of the “calmness” in the Derry performance.

“Inner belief comes from keeping the outside world outside and having the work done. You are only are nervous when you feel you haven’t that done.

“We had the preparation done and it was only a matter of turning up and delivering on it.”

So what’s the outside world? Meenagh speaks of the “bubble” in which the Derry senior setup rests. He’s in a similar one with his club in Loughmacrory.

Outside it, he has “a few confidants” he’ll talk football with. That aside, it’s a total inner focus.

Like very training session and game, Rory Gallagher will pick him up on the way to getting back inside the camp.

With every word, you soon realize how Meenagh and Gallagher bounce off each other. Two fanatics in the same car, pouring over sinews of the Derry detail.

“As soon as he arrived his morning, we had a bit of craic in the car…it is special,” Meenagh said.

Another ingredient he touches on is the growing fan base. As the big yellow bus nosed out of Monaghan’s Four Seasons Hotel, the camp “fed off” the atmosphere.

Pulling into Clones it all became very real. From 15,000 packed souls in the Athletic Grounds for the semi-final, ticket demands went through the roof.

To Meenagh, every pupil in St Colm’s was talking about Clones and the big day.  Coming out to walk the pitch at half time in the minor game gave the magnitude of what was to follow. 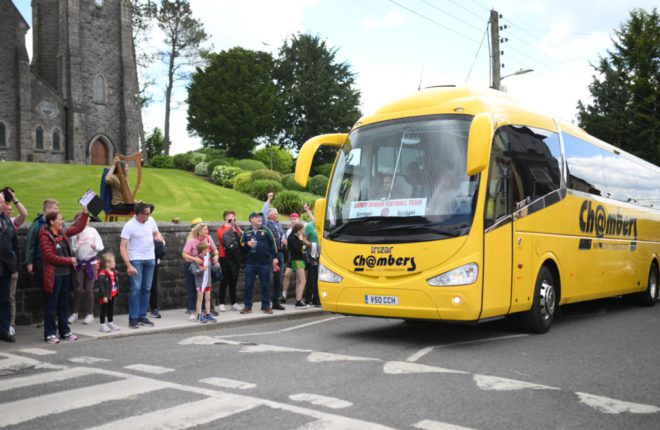 HEADING FOR BATTLE…The Derry team arriving in Clones on Sunday

Another aspect was belief. Perhaps Derry’s biggest word as they aimed to find a way to the steps of the Gerry Arthurs stand.

Did they take any inspiration from Cavan upsetting the status quo to years ago to impose their fresh enthusiasm on the road to glory?

No insists Meenagh. They looked closer to home, the imprint of success from Derry’s school and club teams.

Having “professional athletes” in the squad was a factor, hinting at their returnees from the world of AFL to help rubberstamp the standards needed. Their squad has the bloodlines of Downey, Lynch, Tohill and Cassidy.

“We tapped into all of that,” Meenagh insists.

“These players, if they were playing Tyrone clubs or Monaghan clubs or Donegal clubs,” Meenagh offered. “…they’d all expect to win, and it’s the same in school games, so we tapped into that too.”

The average age of Derry’s starting team was 25.5, exactly one year more than Donegal. Only Chrissy McKaigue, Benny Heron and sub ‘keeper Connlan Bradley are in the thirties club.

A glance at the programme tells you of a team that can only grow. Meenagh names checks a host of the young lads yet to make their Championship debut and how they will grow into “great county men”, but the message on Sunday morning was simple – today was the day.

“When you have a gift horse in the mouth, and we had a good chance to win the game, you have to grab this game today,” Meenagh said, giving another insight into Derry’s focus on the now.

“Hopefully this will accelerate the process. Confidence and belief are two very powerful things especially in a county like Derry that has such pride and tradition.

“If people spin it properly and use it in a strategic way, it will be a good thing. There is such a degree of good will and good people in such a proud football county.”