SUNDAY’S Ulster final met every expectation possible, keeping a bumper attendance on tenterhooks until the very last second.
Emmett Bradley played a year of Corn na nÓg football as a goalkeeper in his youth and as he flung himself in the firing line to deny Donegal a match-winning goal in those frantic final seconds, Derry’s 24-year famine was over.
Derry walked the finest of lines at times. Odhran McFadden Ferry’s run from under the nose of Rory Gallagher in the technical area wasn’t tracked and when Michael Langan’s thunderbolt bounced out of Odhran Lynch’s chest, the Gaoth Dobhair man handed Donegal a passport to redemption with a goal to level matters against the run of play.
Bar Peadar Mogan kicking from outside the Derry cordon and Murphy’s outside of the boot effort to put Donegal into a 1-11 to 1-10 lead with 12 minutes to go, Derry’s defence was watertight.
Patrick McBrearty remained in Chrissy McKaigue’s shadow. Paudi McGrogan was the perfect match for Michael Langan. Jamie Brennan was the man to break Cavan’s hearts, but Conor McCluskey followed him everywhere and still had the discipline to offer enough width on Derry’s attack to help leave the centre of Donegal’s defence ajar.
Paul Cassidy was again a silent assassin, doing to Eoghan Bán Gallagher what he did to Conor Meyler and Conor McCarthy. Covering the ground, he epitomised the team element to Derry’s renaissance and kicked a brilliant score in the first half on his first ever outing in Clones.
When Odhran Lynch lost a kick-out after Derry conceded the goal, it was Conor Doherty who pick-pocketed Peadar Mogan in the scoring honey pot to allow Derry to breathe again. It was the proof of being a unit to match the narrative that dominated the post-game sound bites.
By the standards of his last two games, you’d say Gareth McKinless was quiet. Scratching the surface and the extent to which Brendan Rogers ran the show, McKinless looked like he had a different detail, to man the centre. It was horses for courses.
On the one occasion Rogers actually made a mistake – a loose turnover with Donegal one point to the good – Derry were vulnerable. Murphy’s pass to Shane O’Donnell looked like opening the right side of St Tiernach’s Park, but when McBrearty didn’t peel away from McKaigue to be an option, McKinless helped force a vital turnover and win a Derry sideline ball that ended up with Shane McGuigan swinging over the bar – another inch.
Derry defended with the greater bravery, but they were helped with Murphy far away from full forward where he could’ve penned Rogers back ever so slightly.
It allowed Odhran Lynch to play as the sweeper, with Shea Downey as the pivot to help ferry the ball across when play needed switched.
The whole operation was helped with two things. Firstly there was the selflessness of players willing to drop back, typified by Paul Cassidy and Niall Loughlin making blocks to set the first half tone.
Secondly, they had Conor Glass playing the defensive midfielder to a tee. It was him who got goalside of Caolan Ward when Shane O’Donnell was inside for a goal chance in the first half. 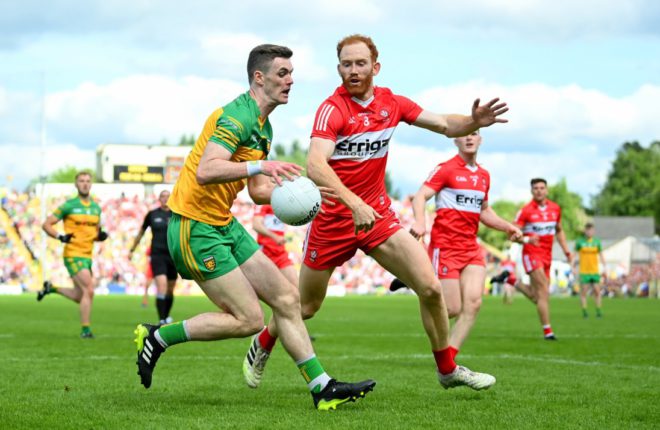 The Derry team who dropped all the way to Division Four didn’t have someone to chase back and plug the hole.
It was Glass who was on the foot of Jamie Brennan when he wound up to take a shot in the first half and he took the sting out of Hugh McFadden’s shot that spun into the waiting arms of Shane McGuigan when the game went down the stretch and Derry a point ahead.
Derry were lucky when Michael Murphy failed to take anything from his first three shots at the posts.
Only Peadar Mogan and Odhran McFadden Ferry attacked with any urgency, whereas Derry got players wide to stretch the game to the max, with Rogers and Ethan Doherty punching through the middle.
Starting Shane McGuigan at centre forward took the tight-marking McCole out enough to take Donegal out of their comfort zone and Derry allowed Stephen McMenamin on the ball up as far as their wall of red jerseys across the middle.
Donegal’s saving grace was Shaun Patton. While he only went long with one kick-out – lost by a Michael Langan push – he looked for the medium range kick-out more than the cheap poke to a defender. Of Donegal’s 16 points, nine of them found their origin with the ice-cool Letterkenny man arrowing a ball to the run of a player into a vacated flank.
On the Derry side, there was the concern that Odhran Lynch would struggle in the manner Ethan Rafferty did in Ballybofey.
But Lynch took his 54 per cent success rate from the Monaghan game to 76 per cent on Sunday, helped with nine of his kicks going short and Derry’s safe plan of using width to great effect. It was a world apart from the day Galway penned the Oakleafers in on their kick-outs in the League.
Of the nine he kicked long on Sunday, Conor Glass was the primary target and scavengers were sent to feed off the scraps.
Lynch had Benny Heron to thank in the 44th minute. A kick-out angled to the touchline was somehow kept in. Derry had shipped three scores in succession to fall 1-9 to 1-7 behind. Heron found a way to hook the ball into his grasp and seconds later Shane McGuigan made it a one-point game, another of the small gains to keep their nose above water.
Derry engineered 1-9 from their kick-outs. And of the 1-5 that came from a short option, two had a kick pass that resulted in a point and another saw Ethan Doherty’s run leading to Niall Toner’s incisive cut to make the goal for Loughlin. 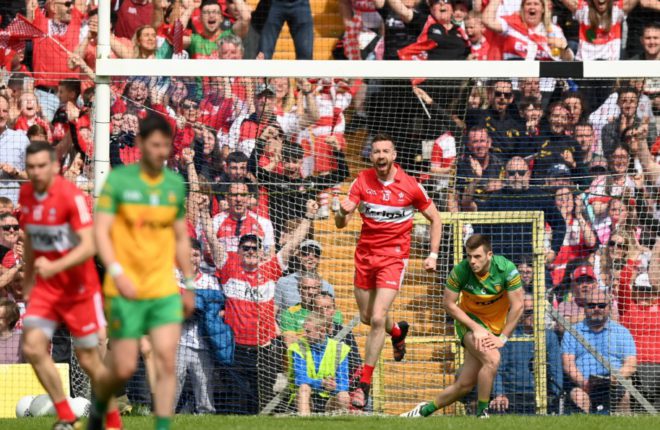 In fact, of the five unsuccessful Lynch kick-outs, only his drive down the throat of Michael Murphy ended with a Donegal score. Another resulted in a push at midfield and a free in. Derry forcing turnovers on another two and red jerseys suffocated McBrearty on the other.
It all points to Derry using hunger and aggression in the face of a potential threat.
Derry hadn’t fallen behind in any of the games to date and as Donegal edged ahead twice in normal time, it was the litmus test.
There was no obvious sense of panic as they trailed 1-12 to 1-10 with ten minutes to go. It was Paudi McGrogan and Conor McCluskey who helped Conor Glass in the clear when a clumsy Caolan McGonagle leg felled Glass for McGuigan to kick Derry in the ball game.
From the resulting kick-out, McGuigan chased down Stephen McMenamin to turn him over before being tugged down without an obvious black card being shown by Sean Hurson and McGuigan levelled matters.
An extra man for 10 minutes would’ve been huge.
The only other questionable decision, in an otherwise strong performance, saw Hurson find himself accidently in the way of a Donegal handpass on an attack. A hop ball would’ve have saved his blushes, had Conor Glass nailed his late chance to win the game inside the posts.
Donegal had the more experienced bench. They’d played 10 finals in 12 years. Both were key ingredients in their favour going into extra time.
Derry, who had lost the previous two throw-ins, made the call to start Brendan Rogers at midfield for extra time. In a move that looked premeditated, Rogers beat Murphy to Hurson’s throw-in and punched the ball into the Derry attack where it was kept for two and half minutes until Lachlan Murray hit a wide.
Game management at its best. After Donegal went ahead thanks to Ryan McHugh’s perfect pass to Aaron Doherty, Emmett Bradley thumped over a monster equaliser.
Rogers did exactly the same at the start of the second half of extra time, another two and half minutes of Derry possession ended with McFadden Ferry pulling down McGrogan and McGuigan opened a lead they never lost.
If Rogers hadn’t done enough to secure Man of the Match already, he kicked a third score and found another ounce of energy to pick up a short free from McKaigue before firing on the afterburners to set up Glass for the insurance point.
There isn’t a single word in any language that would Rogers’ performance any degree of justice.
Derry had plenty of strong performers, but he was on a different level. It was a “hammer the hammer” situation of the highest order.
His three points in comparison to Michael Murphy notching two and was left to chase a game Donegal needed him to control.