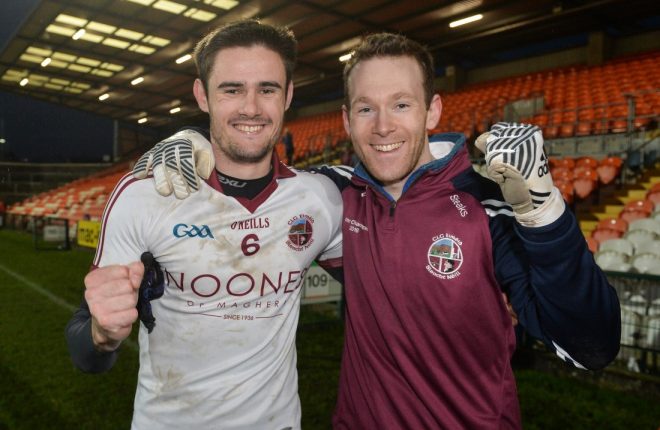 Slaughtneil completed another incredible treble yesterday, when they beat Cavan Gaels by 1-15 to 0-10 to win the Ulster Senior Football Championship title.

That completed the three-code success of winning Ulster senior Camogie, hurling and football titles in the same year. They achieved the same success last year, becoming the first club ever to to do so.

To do it a second year in a row was simply incredible, and the manner with which they won the football title, regarded as the hardest of the three to win because they had to play four games in the Ulster series, suggests that they could be the dominant force in Ulster for some time to come.

They never appeared to be in trouble against the Cavan champions. They led by 0-7  at half time, and stretched that lead in the second half. Shane McGuigan scored 1-6, Patsy Bradley was excellent at midfield, and Chrissy McKaigue was at his very best in another great victory for the club.

They now look like they could make up for their All-Ireland club final disappointment in March. They take on Nemo Rangers early next year, in the semi-finals.

Here’s what the fans had to say about the might Slaughtneil men:

Ulster champions will be home about 8.30 pic.twitter.com/ubCm2hpWbZ

The Double Treble and an All Ireland in just the space of 2 years!! What more can be said pic.twitter.com/W5POH32C8d

Time to split Slaughtneil into North & South Slaughtneil, getting too dominant! ☺

Very proud Slaughtneil and Derry man tonight. The lads will finally get a night to celebrate! Great to see B’Derry and Lavey parents with their kids wearing Maroon & White in front of us at the game. We’ve had great support from throughout the county!

Well done to @CKaigue and all at Slaughtneil on another incredible year. An amazing community & club who have set an example to all. Well done my friend.

What more can you say about Slaughtneil, hard to see this ever being achieved again. Hope they go and get their All-Ireland now. #SeriousOperators

Immense win for @NemoRangersGAA. It’s a cliche because it’s true: they a formidable animal in a final. Them v slaughtneil could be a classic.

Slaughtneil what a club an inspiration to everyone around Ireland . Hurling camogie and football titles 2 years in a row in ulster @AIB_GAA.

Shear class!!! them slaughtneil boys can do no wrong!! Good man Karl

Slaughtneil are very impressive & better than last year with strength in depth. Be hard to stop.