JANUARY means one thing to the hurlers of Sleacht Néill – it’s time to make the next step and book a first ever spot in an All-Ireland hurling final.
Their win over Ballycran saw them take home a fourth Ulster title and with every foray onto the national stage, the Emmet’s have made progress.
At the age of 31, Sean Cassidy is the second oldest on the starting team, with 14 Derry and seven Ulster senior medals to his name across both codes. Only Chrissy McKaigue is older.
Cassidy speaks of progression and how Sleacht Néill were ‘unlucky’ to have run into the best teams in the competition.
First it was a 13-point humbling by back to back All-Ireland champions Cuala in their first year on the All-Ireland block, which was followed by pushing 13-man Na Piarsaigh all the way before going down by seven points in a game they had a firm grip on.
Sleacht Néíll’s last outing was an epic with Ballyhale Shamrocks, who they took all the way to the final fork in the road before Henry Shefflin’s charges pulled clear.
“Against Cuala…we learned a lot that day,” Cassidy points out.  “You think you are going well and you get to that next stage, it’s another step up.”
The Emmet’s await the winners of the Munster final Ballygunner and Kilmallock later this month, with champions Ballyhale and 2013 winners St Thomas on the other side of the draw.
“Our big focus at the minute, it’s not that we want to win an All-Ireland, but we want to win a semi-final first. The last two or three years, we have shown that we can be competitive on the big stage, but we know we have been lacking that final wee piece of the puzzle.”
The five weeks from their win over Ballycran gives them time to crank up their preparations, but not at the expense of celebrating.
“When we won our Derry championships, I could count on one hand the amount of times we got to celebrate them,” Cassidy admits.
“When you are involved in the football and hurling – week in week out – you don’t get much time.”
Manager Michael McShane encouraged his squad to enjoy the fruits of their labour.
“Mickey encouraged us to take a couple of days (to celebrate) and then boys settled their heads to focus on training again.
“It gives you a chance to bond, to have that chance to socialise and the young boys came out of their shell.
“We are a busy club and it can be very intense, week in week out. At the back of your head, you know the big games are coming up.”
The Emmet’s have won 15 Derry titles in all, with a 13-year gap until 2013 and the start of the nine-in-a-row.
Since making his debut as a 17-year-old in 2007, Cassidy has been a virtual ever-present in the side, apart from an ankle injury forcing him to spend a spell on the sidelines early in his career.
He points to the influx of younger players, ‘decorated’ with medals, coming into the side pushing them towards their 2013 win over Kevin Lynch’s on their way to the collecting the Derry championship.
“Everything just snowballed and we have good management along the way.  Mickey Glover was there, then Mickey (McShane) stepped in,” adds Cassidy, who also points to the confidence winning titles in both football and hurling brought.
He also refers to their 2013 Ulster final with Loughgiel at Celtic Park. A Cormac McKenna free, driven to the net, helped Sleacht Néill into a 1-6 to 0-1 lead before the Shamrocks reeled them in to win by five points. 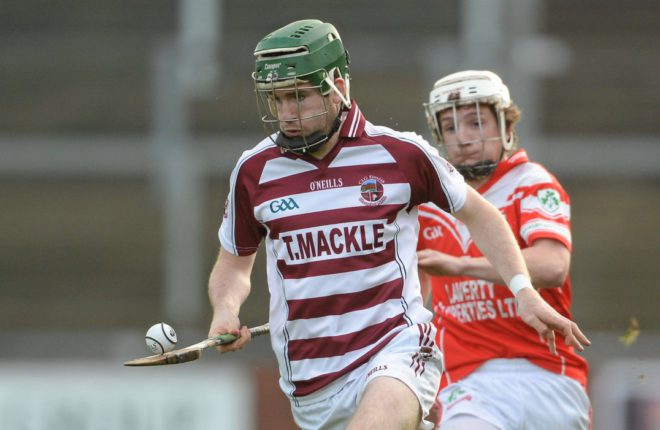 “The Loughgiel game showed us that we could complete with them, even though we didn’t win.  That was a springboard and it gave us the confidence that we could compete with the Antrim teams and  you know you are not that far away.”
Fast forward six years, and taking Ballyhale to the pin of their collar signals how far the Derry kingpins had come. But now, they want more.
“Mickey (McShane) keeps telling us that we don’t want to be a team that is competing in the All-Ireland, we want to make it to the next stage. The semi-final is definitely a good stepping stone for us.”