After winning the title three times with his native Ballymaguigan, Brady is in his second year in charge.

The 2021 league success was followed up by Drumsurn’s third semi-final exit in four years and while Brady concedes Glenullin hold the favourites tag, he as “quietly confident” his charges can bridge the gap since their 1991 title.

Glenullin were 0-14 to 1-9 winners when the sides met in the group stages, but Drumsurn are since unbeaten, having played three games in a six-day period.

“We never looked past Desertmartin, it was the sort of game I was worried about as an up and coming side,” said Brady of their quarter-final opponents.

Going into their semi-final with league champions Foreglen, Drumsurn kept the build-up low key. It was a change to previous seasons when hype didn’t help performances on the day.

With Ciaran Mullan orchestrating much of their play, Drumsurn were 1-7 to 0-3 coming into the half-time before Foreglen struck for two goals in as many minute to cut the gap to a point at the break.

“Last year, Greenlough hit us for 1-1 coming up to half-time,” Brady recalls. “It was over; you could see it in the boys’ body language.

“We came in a point up (this year) and it was the first time (in the four semi-finals) they found themselves ahead at half-time.

“We told the boys they’d played all the football except for the last couple of minutes. Last year we were gone at half time but the boys went out with the same attitude and we kicked on.”

The Tuesday after the semi-final, Brady put his side through a tough session to bring them back down to earth.

With their pitch closed for maintenance, they have been indebted to other clubs for the loan of their premises. It also works as an advantage to keep them away from the buzz on training nights as they prepare for Sunday’s final.

“Every club has four or five lads down watching training, we don’t have that.

“We go and do our training,” said Brady, who wants the squad to enjoy the build-up away from training nights.

“It’s 20 years since Drumsurn were in a final,” he said. “I have been in five finals and I am trying to share my experience.

“We know there is a big prize, but football is there to be enjoyed…there is no point in getting to the final and not enjoying it.”

Brady feels a case can be made for either team to be the fancied side and some might see it as a bigger draw for Drumsurn given Glenullin have senior titles to their name,

“The commitment level they (Drumsurn) have given deserve a championship, but it’s never handed to you and we know that.

“We were 31 to win the semi-final and Glenullin were favourites to beat Castledawson and I can’t see that changing inside two weeks. We are going in as underdogs, we are going in quietly confident.” 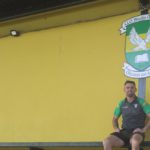