EMMETT Bradley has backed the character in the Glen ranks as they continue the defence of their Derry title this weekend.

The Watties were 1-14 to 0-11 winners over Magherafelt and take on a Newbridge team in their first semi-final since 1994.

After waltzing to glory last season, Glen made it to last weekend’s last eight the minimum of fuss before Sunday’s repeat of the 2019 decider they lost to Rossa by a point.

“It was huge,” Bradley said of Glen’s preparation to peak for the business end of the season.

“We knew we were in a serious battle and went in a point down at half-time. Magherafelt have an unbelievable amount of quality all around the pitch, they are a well-drilled outfit.”

Having played for Derry under Damian Barton and Brian McGuckin, Bradley felt they’d have Magherafelt as formidable opponents as the championship heated up after a limp opening.

“We knew it was going to be a serious test and we knew we needed to be at our best to beat them,” said Bradley.

When Malachy O’Rourke addressed Glen’s fans at the homecoming in Maghera last autumn, he hailed the expertise of trainer Ryan Porter at getting them primed for when it mattered most.

Bradley missed much of the championship, with Ryan Dougan and Jack Doherty spending time travelling over the year. Cathal Mulholland also looked in the shape of his life after a troubled time with injuries.

“It is the same challenge for every team,” Bradley replied on the topic of Glen’s periodisation.

“You are obviously trying to reach those standards and those levels at the right time.

“We are really glad we put in a big second half performance and we upped it with the opportunities and we know we’ll have a really tough test against Newbridge.

“There will hardly be a pike of training done this week, it will be keeping the heads down, focussed, recovered and try to up it for the next game.”

Sunday’s opening half was played at 100 miles an hour, with each team taking turns to attack. When Shane Heavron kicked Magherafelt into a 0-8 to 0-6 lead, it was decision time for Glen.

”That’s the way the game is nowadays. It is whoever can manage the ball better and take their opportunities,” Bradley said. “Magherafelt took every opportunity in the first half put us under pressure.”

Stevie O’Hara’s goal put Glen back in front and Bradley pointed to their side’s bottle and ability to find another gear.

”One quality we have really developed is that we try not to panic and we know we are going to face really tough challenges,” he said.

“It is about staying in the moment, focusing on the next play and seeing where that can take us and it took us in the right direction.”

Alex Doherty came off the bench after losing his place in attack and Bradley knew the boost was there when the game opened up.

“We have a lot of quality on the bench and we are really glad about that,” he said.

“Boys are really humble to come on and impact the game and that’s what they did, they came on and did their job.” 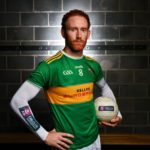