BALLINDERRY Shamrocks have appointed Killian Conlan as their new senior football manager ahead of the 2023 season.

Conlan, who has yet to finalaise his management team, takes over from Kieran O’Kane who stepped down after a year in the post.

The Shamrocks saw off Coleraine, thanks to a late Daniel McKinless winner, to secure their senior status last season before going out of the championship against Lavey.

It’s Conlan’s first time manage Ballinderry seniors after being involved in various backroom teams and being heavily involved at underage.

A former Derry minor and senior selector, Conlan was recently in charge of Newbridge.

Ballinderry have not got their hands of the John McLaughlin Cup since completing three in a row in their 2013 Ulster winning year.

After losing many of their multiple championship winners to retirement, they have been blooding youth into the side, with Ruairi Forbes set to join new Derry senior recruit Niall O’Donnell in the senior ranks this season. 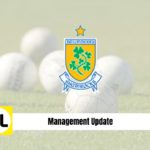 Ballinderry under new management for 2022