Advertisement
HomeCountiesDerryDerry County FootballTEAMMATES: Derry All-Star forward Paddy Bradley looks at some the players he lined out with
Advertisement

Which team mate has been the most inspirational and why?

Anthony Tohill. I only played a few years with Anthony but the aura he had about him and his presence in the changing room is something that couldn’t be matched. He prepared meticulously and rarely posted a performance below eight out of 10.

He is up there with one of the greatest players of all time in my eyes, a real leader. I had the pleasure of working under him when he was part of the management team for the International Rules in 2008.

Who was the best team mate to train with and why?

Enda Muldoon. He had talent oozing from him and made things look so easy. I had a great relationship with him when we played inside together, coming from the many in-house games we played. He was always thinking one step ahead and fortunately I got in sync with that.

Which team mate was the worst to train with and why?

Any of the fitness freaks. In any team I played and trained with, you always had a share of players who would have ridiculous levels of stamina who would put the likes of me to shame during long running sessions. I used to dread any run over 200 metres, of which there were many over the years. I was built for speed not stamina.

Which team mate did you want to mark in training and why?

John O’Kane, brother of Gerard. John always thought he could mark me, but he never could. I’d maybe be going at 60 per cent in some of the sessions and be watching myself for the next game, however he would think he would be doing well on me.

Which team mate did you dread marking in training and why?

Sean Marty Lockhart for obvious reasons. Many a bump, bruise and cut lip came out of our encounters. No quarter was asked, and none were given.

Which team mate was the best on journeys away?

Kevin McCloy. Myself and Kevin would have sat on the bus together and roomed together. We became great friends and he was groomsman on my wedding. On the back of the Derry bus, there was always good banter with Fergal Doc, Niall McCusker, Paul Murphy, Paul Cartin, big Patsy (Bradley) and Frank Twin (McEldowney) to name but a few.

Which teammate was the worst for journeys away?

It would be Martin O’Rourke on days away with UUJ. Going to the match was fine, but what happened after the match and the getting home was the problem. Making it home used to take more than a few days and usually meant coming out of a few tight scrapes.

What was the worst excuse you’ve heard to get out of training?

Niall McCusker missed quite a bit of training down the years. He used to leave work (he works at concrete flooring) early so he could get a few hours’ sleep before heading up the road. On more occasions than enough he didn’t waken and missed training.

Which team mate was the loudest in the changing room?

Gerard O’Kane in the Glenullin changing room. He always did like the sound of his own voice.

Which team mate would you have wanted standing over a last-second penalty?

Not Eoin (Bradley). He has a terrible penalty record for a man who claims to be a semi professional soccer player. Maybe that’s why Coleraine have banned him from spot-kicks. In fairness to big Ronan Rocks back in the day, he liked a good penalty and was a decent striker of a ball.

Which team mate would you never have wanted to see hitting a last-second penalty?

Which team mate was the most sensible?

Joe Diver. As sensible and as measured a man you might ever meet…..until the ball was threw in.

Who was the smartest of all your team mates?

Dominic McIlvar in Glenullin. He made himself a millionaire by the time he left university in Belfast. He chipped every NTL box in Belfast for a number of years and was only student I knew to be driving a £30k car, bar Jim McGuinness.

Who was the best team mate to celebrate with?

One thing about the teams I played on, we had no bother celebrating. Maybe we overdid it and that’s why we weren’t as successful as we should have been. In Glenullin, you had that family feel to things as we did everything together.

With Derry, boys like Paul Murphy, Paul Cartin and Eoin McCloskey loved the craic. When I think about it, it was the Dungiven (and surrounding area) men who were the ringleaders. 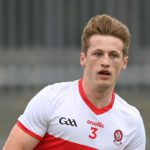 Momentum in the league is precious: Rogers