THE Fermanagh Herald front page on 18 December 1996 showed a beaming Cormac McAdam celebrating moments after helping the Erne County to the All-Ireland B title in Carrick-on-Shannon after a replay win over Longford.

The Fermanagh goalkeeper had collected the trophy from then GAA President, the late Jack Boothman, amid a huge pitch invasion from the travelling thousands. Included in the Fermanagh support that day were Owenie Callaghan, Jim Cassidy and Jim Breen – members of the Fermanagh team that had claimed the All-Ireland junior title in 1959.

Tears flowed readily. When McAdam addressed the crowd on the pitch afterwards, reporters could hardly hear what he was saying over the din.

Top scorer on the day was a certain Rory Gallagher, who this weekend will aim to bring Derry to an All-Ireland semi-final for the first time since 2004. Kieran Donnelly, the current Fermanagh manager, also registered a point in the 0-12 to 0-9 win 26 years ago.

Finally Fermanagh, who famously – unfortunately so for those of an Erne persuasion – have never lifted an Ulster senior title had a day to equal that 1959 success, a day when the supporters could feel on top of the world. One of only two times in their history that the Erne senior men’s team could celebrate an All-Ireland success.

“There was always talk of running an All-Ireland B and all the teams entered with good faith,” McAdam said.

“At that time it was the old format that if you’re beat in Ulster you’re out so it was great to get us back in the game. It was run at the right time of the year too because you’d have four games in the National League before Christmas.

“We had gone down a division, to Division Four, and we were very low. We got a new management team of Pat King, Gerry McElroy and John James Treacy who got us back on track.

“We got a couple of wins and got going and the whole county really got behind us. After winning it we went on and got promoted and we also won the McKenna Cup.”

Ten years on from that joyous moment though, McAdam’s life would change forever. The plasterer fell off a roof when working on a chimney in 2006. He broke his back in five places while eight broken ribs also led to spinal and nerve injuries that confined him to a wheelchair.

Rather than let it end his sporting career, McAdam has gone on to become a fine golfer thanks to some fundraising help from the Fermanagh GAA, Lisnaskea, who were a tremendous help, and Club Eirne.

“I got great support from the GAA people in a real time of need,” he said.

“You see that so often with GAA, the community spirit is on show and they rally around when times are tough. We have seen it umpteen times. The GAA may have its faults but the generosity of its members is certainly not one of them and I experienced that fully.”

That support meant he could purchase a specially-adapted buggy that allows him to hit golf shots in a standing stance, something that has been invaluable to a man who has also raised plenty of funds for spinal charities over the years.

In 2013, he competed for Ireland in the Wheelchair Users European Golf Championship in Barcelona and finished a very credible 10th out of 24. He returned in 2015 determined to improve on that performance and he did that and more with a podium finish of third.

In the same year he won his first big competition at his local club Clones – and had his annual fees paid for doing so.

Now in 2022, apart from helping to organise his club’s annual golf classic, McAdam’s GAA schedule is lighter than usual after four decades of total commitment.

“I was club chairman for a while, on the executive committee for a few years, it was four decades from u-13 level up.

“I’m 16 years in the chair now and it’s the time first time in few years not on the committee. I’ll still get to the golf course though and I’ll hopefully get to watch Fermanagh.”

A few months after that win in Carrick in 1996, Fermanagh lined up against the Cavan in the Ulster Championship buoyed by that All-Ireland success.

They had the contest won until Anthony Forde earned Cavan a replay with the last kick of the ball in a game where generous additional time was added.

Martin McHugh’s side would come through the replay and go on to win Ulster in what was the county’s last provincial title until their winter victory over Donegal in 2020.

The 1997 Erne team’s season ended after that replay loss, but Fermanagh’s didn’t this year after their Ulster loss to Tyrone in April. That’s because they progressed to the new Tailteann Cup. After a win against Longford, they saw their hopes ended by the Breffni County who have now set up a final meeting with Westmeath.

Manager Kieran Donnelly spent many years coaching in the Breffni County with Cavan Gaels, so their homework on the opposition should be pass-worthy anyway.

That final will take place at Croke Park, somewhere McAdam has been a regular visitor to over the years.

For all the memories that rush back from that 1996 winter’s day in Carrick-on-Shannon, lifting that All-Ireland B title on the steps of the Hogan Stand would have made it all the sweeter.

“That day in Carrick-on-Shannon, we ran out and we were not expecting that sort of crowd,” McAdam said.

“That tournament gave the smaller counties a real lift. It was a really good competition.

“It’s good to see that Croke Park is opening up for it. It seemed like it was almost a stadium for the elite teams but we all play by the same rules and the commitment is the same for everyone. Every GAA member should be the same but when it comes to getting into Croke Park other counties do get preferential treatment.

“It seems like it’s a secret ground sometimes for only the elite, so it’s great to see it opening up for the Tailteann Cup.

“It would have been lovely for us to get to Croke Park back in 1996. It was a pity it wasn’t open to us but it was still good to get the win.”

Despite the premise of the Tailteann Cup being much maligned, teams have really taken to it with a good crowd at Headquarters for Sunday’s semi-final double bill.

McAdam said that it could be something special, especially with a round-robin system set to come in for the 2023 competition.

“I was watching The Sunday Game and from the highlights of the Tailteann Cup (earlier in the competition), it looked like there were some cracking games.

“You could see what it meant to the teams, Carlow and Fermanagh and the likes.

“We used to say when we were in Division Three and Division Four that just because we were a smaller team doesn’t mean we don’t train as hard as those other teams.

“You put the same effort in, you do the same ball drills, you’re maybe even training harder to try and close the gap.

“So it’ll be great to see these teams on TV and the likes from the semi-finals. It can be a great tournament.” 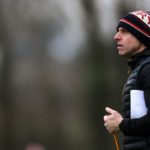 Squad goals for Donnelly ahead of Laois visit 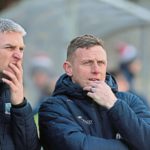