DOWN Footballer Gerard Collins told Gaelic Life’s Take Your Points show recently that it is alarming that no Down manager has been installed to replace the departing Paddy Tally.

Tally stepped down as manager after one year in charge of the Mourne County. He had asked for a one-year extension but he didn’t have enough support from the clubs and decided that he should move on.

Collins, who has played for the county for the past six years, says that the departure of Tally, and the absence of a new manager, is another chapter in a frustrating story of Down intercounty football.

“It is late in the day (to not have a manager). I have played under Jim McCorry, Eamonn Burns and Paddy Tally. But if you look at Armagh they have had Kieran McGeeney for a number of years, and while it hasn’t brought them the success that they desire but you can see the improvement there.

“We would have liked to see Paddy Tally get another year because we are back to the start. We are looking at a situation now that we are going to have a new manager come in, and he might have trial games and he is going to have to get to know the players, but then we are going to have the league coming round quickly and he might be experimenting. So it is alarming that they don’t have a manager in place. But maybe they are in discussions or they are holding out for the right man.”

One name that has been rumoured to be connected with the job is Peter Canavan. Another is Derry man Conleith Gilligan who works as an assistant to Mickey Moran at Kilcoo. However, Gilligan announced this week that he has not been contacted about the role, and nor is interested in the position.

In this week’s Take Your Points show, Collins also talks about some of the challenges that a new manager will face.

“The thing about Down is there is a turn over of players. Take out Barry O’Hagan, Darren O’Hagan, Caolan Mooney, and Kevin McKernan, there is a lot of inexperience in that team.

“I made my debut in 2015 and it is alarming the amount of players that have passed through the team in that time. For one reason or another we can’t get players to commit.

“It seems that players just come and go. You don’t get that core batch of players. There are only a handful of players have stuck it out. There are some players who just don’t put their hand up.

“If you look at Tyrone that doesn’t happen there. They love to play for their county. It is strange considering the tradition that is Down.”

Collins is on the Take Your Points show to discuss the recent Special congress which debated a number of motions, including a debate about changing Championship formats. Collins felt that while neither motion was upheld, change is coming in the GAA. The Downpatrick player also talked about the state of play in various club championships in Ulster. He recalled his own club’s exit from the Down championship and outlined why he felt that the club competitions in the province are so strong.

Watch the show now on You Tube, or listen to it on Spotify or your favourite podcast. 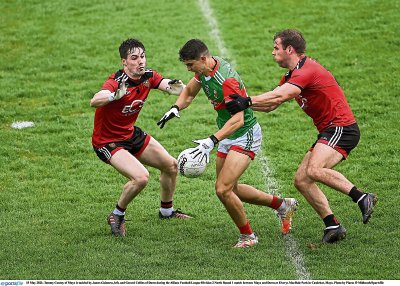