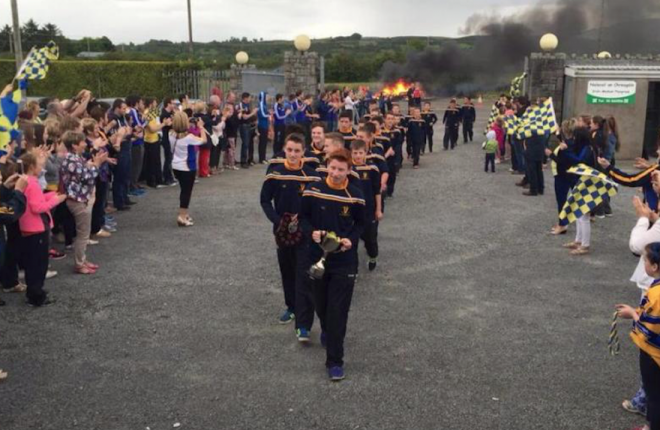 “TRY and play with the slope in the first half,” was a phrase often passed by manager to captain as the player was called over by the referee for the pre-match coin toss in Silverbridge.

The south Armagh venue was always a memorable spot with visiting teams. The fact that it had a stand when few were about seemed exotic in a time of leaning on wire fences, but it was the slope that gave it a bit of character. The thing is, the debate about whether there is a slope or not still rages on with plenty still insistent that it’s not the case.

Slope or not, the club carried out extensive work on the pitch last year as they continue to lead the way when it comes to GAA facilities in county Armagh.

Silverbridge may be a small club, but they have always been an innovative one.

The resource centre at Keely Park plays host to everything from badminton to bowls and its main hall is used by clubs near and far to host big events.

They were also one of the first clubs in the county to include a walking track around their new second and third pitches when they were opened back in 2007. Drive past the grounds on any night of the week and there will be plenty there doing laps regardless of the weather.

Indeed, summing it up you could ascertain that Silverbridge were one of the first to realise that a GAA club can’t just be about football, hurling and camogie – it has to be about the community too.
“It’s all down to the hard work of a lot of volunteers,” said vice-chairman Noel Reel.

“There’s so many different things, like fundraising committees and hospitality, that there’s something for everyone to do.

“The hall has been great. You’d have everything from Taekwondo to badminton to bowls; different wee things going on like the youth club too.

“You have people coming from different areas and you try and hold onto them.

“We value ourselves as a community club and one that everyone can be proud of.”

Not that the club focuses solely on off-pitch matters though. After a few quiet years, there has been a bit of a resurgence on the field too.

It’s hard to look past the 2013 minor team as the trigger. They played out an epic encounter against Killeavy in the Armagh semi-final when they came back from the dead to win 4-11 to 3-10 after extra-time. Dromintee were expected to be much too strong in the final, but they controlled the majority of the game to ease to the title. They needed extra-time again in the Ulster quarter-final against Ramor United before they defeated Carrickmacross in the semi-final. An Ulster final loss to competition specialists Watty Graham’s brought to an end a terrific season under the tutelage of Declan McVerry, Joe Crawley and Michael McGeeney.

The last three seasons have been aimed at bringing those players through to the senior team and, ahead of schedule, they secured promotion back to the senior ranks earlier this month – with the proviso that a team below them doesn’t win the Intermediate Championship.

Like any rural club, the emergence of a good crop of youngsters brings plenty of excitement and, more importantly, the need to take advantage.

“The ’84 team went on and I would say seven, eight, nine of them played senior football for 10 or 12 years after that whereas the ’94 team didn’t.

“That was a great minor team we had three years ago and they’re the basis of our senior team at the moment.

“It’s all cycles as I say. At the moment our minors aren’t the best, but rural clubs go up and down.

“Crossmaglen would be continuously strong, Killeavy would be traditionally strong every year.

“For ourselves and the Mullaghbawns and the Cullyhannas it comes and goes.

“If you can get two or three good players through every year then that’s all you need.

“It’s good to be able to field your own teams. We struggled at minor this year and u-16s last year to get 15 players.

“I’d be driving the minibus last year and you’d be heading to Whitecross or whatever with 13 players, but then this year’s u-16s have the numbers. It’s just the way it goes in small clubs.”

One area that really seems to be holding its own is the ladies’ game in the club.

In 2012 Silverbridge won the junior title and made it all the way to the Ulster semi-final. In 2014, Denise Buckley’s dramatic last-gasp goal handed them the intermediate title at the expense of Lissummon. Two months later Mairead Tennyson picked up the club’s first ever Allstar following a string of heroic defensive performances for her county.

Accolades have arrived in other areas too, particularly when it comes to Scór with the club having a reputation for providing outstanding quiz teams.

One of the club’s greatest achievements arrived more recently when their ceili dancing team collected the Scór na nÓg rince foirne All-Ireland title back in Janaury.

With the football season coming towards its conclusion, the focus is now shifting to other community events.

One of those was held last weekend when the u-8 management and parents organised a blitz to raise funds for the Kevin Bell Repatriation Fund. Twenty teams from the south Armagh area competed and because of the generosity of so many businesses and individuals, a large quantity of surplus food and drinks was donated to a Dublin-based homeless charity.

The KBRT unfortunately has had to come into to the minds of club members following the tragic death of Niall Quinn in Australia in January. The Trust provided considerable assistance at the time of need, and since then the Quinn family, as well as the Silverbridge community, have been raising funds for the charity.

The blitz was just one even in an increasingly busy Harps’ calendar. It seems that there isn’t a weekend that goes by without an event being held in the resource centre.

Big Breakfasts, coffee mornings and country and western dances all contribute to the fund-raising effort, but November’s main event is always one of the most highly-anticipated of the year.
Club members will get to see some of their locals edging out of their comfort zone when the Silverbridge Panto Players present ‘Beauty and the Beast.’

Silverbridge has been switching between a Christmas variety show and a pantomime over the last few years, with children and adults all participating in huge numbers.

These events are not only designed to make much-needed money to help run the club, but to tighten the bond that exists in rural communities where the GAA club is often at the epicentre.

They play a vital role in reminding everyone what can be achieved despite small numbers. What can happen when everyone chips in and plays their part.

“Cross the road and that’s Cullyhanna parish. Mullaghbawn is down beside us too, then you’re into Creggan and Crossmaglen the other side. There’s a border two miles up the road,” said Reel on the number of clubs they are competing against.

“We look to be a big club because we have big buildings, but we’re a very small club.

“We may be small but we have a great community with great workers and that’s why we’re where we are today.

“Down through the years a lot of people have done a lot of work and we’re seeing the benefit of that now.

“It’s just the way of small clubs. Everyone does their bit and you keep going and you keep trying to improve it. It’s all about the sense of community.”

It’s a community that is growing stronger. It’s a club that’s succeeding because of their innovation. Their future is solid.
n.mccoy@gaeliclife.com

How are they doing now?
The senior side is on an upward trend as they have been boosted by the progress of the 2013 minor champions. Intermediate A was a minefield this year but they have managed to earn promotion, unless a team below them wins the Intermediate Championship. They’ll have their eyes on that title too, and their campaign starts against Middletown on Monday.

Former/Current players
Jarlath Burns is the club’s most famous player having captained Armagh to their long-awaited Ulster title in 1999. He has become a familiar face in the media and administrative side of the games since. Damian McCann, the club’s main scorer, was part of the Armagh u-21 squad that won the All-Ireland in 2004 while midfielder Peter Carragher had a massive input as the minors won the Tom Markham Cup in 2010. In earlier times, the McCreesh brothers backboned the team in the 1920s with four of them playing for Armagh Juniors. Jemmy McCreesh scored the winning goal for the county in their Ulster final against Cavan in 1926.

Local rivals
It’s south Armagh so take your pick. Any match with clubs around them usually can be hard-hitting affairs, particularly meetings with Cullyhanna, Crossmaglen, Forkhill and Mullaghbawn.

Manager this year
Joe Crawley, part of the 2013 minor management, is in charge of the seniors this year. Declan McVerry is also part of the management team along with Michael McGeeney.